Difference between revisions of "Dhamma" 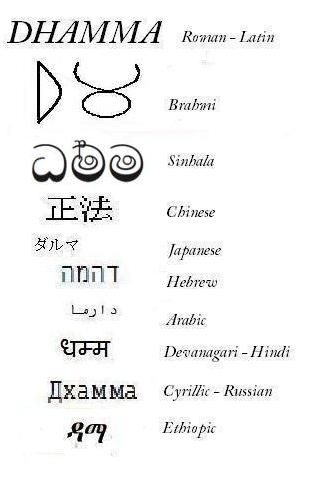 Some Buddhists take refuge in the Buddha, Dhamma, Sangha (Triple Gem) to show respect and appreciation for the teachings. Even the Buddha had refuge to go to. For him, it is the Dhamma. After enlightenment the Buddha said, “Let me then honor and respect and dwell in dependence on this very Dhamma to which I have fully awakened.” Anguttara Nikaya 4.21

Since the Dhamma is a term for the all-inclusiveness of the teachings, the Buddha emphasized the importance of Dhamma:

“Remain with the Dhamma as an island, the Dhamma as your refuge, without anything else as a refuge.” Samyutta Nikaya 47.13 and also at Digha Nikaya 26.

The Six Qualities of The Dhamma

Anguttara Nikaya 11.12 The Six qualities of the Dhamma:

1. Svakkhato: The Dhamma is not a speculative philosophy, but is the Universal Law found through enlightenment and is preached precisely. Therefore it is Excellent in the beginning (Sila: Moral principles), Excellent in the middle (Samadhi: Concentration) and Excellent in the end (Panna: Wisdom),

2. Sanditthiko: The Dhamma is testable by practice and known by direct experience,

3. Akaliko: The Dhamma is able to bestow timeless and immediate results here and now, for which there is no need to wait until the future or next existence.

4. Ehipassiko: The Dhamma welcomes all beings to put it to the test and to experience it for themselves.

5. Opaneyiko: The Dhamma is capable of being entered upon and therefore it is worthy to be followed as a part of one's life.

6. Paccattam veditabbo vinnunhi: The Dhamma may be perfectly realized only by the noble disciples who have matured and enlightened enough in supreme wisdom.

Dhamma is a Pali word but Pali does not have a script of its own. It uses the script of various languages where the Dhamma is being taught. The Tipitaka was an oral tradition and written down in the first century BCE in the Pali language, using the Sinhala script. But several hundred years before that, King Ashoka had many edicts written in Magadhi and other languages similar to Pali using the Brahmi script. Listed above is the word Dhamma written in ten major scripts. Notice that the Brahmi script has the first character which makes the "Dha" sound and is almost identical to our letter "D."