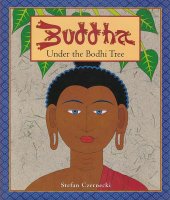 The cover of a Dhamma book for children

At Dhamma centers around the world there are two distinct patterns in the congregations. In the East, e.g. Sri Lanka, its predominantly very old ladies with very young children, such as granny looking after the kids. Young people only ever come to the temple on festival days, and then partly to check out the talent.

In the West it is predominantly the 20 to 45 age group with hardly a child in sight. Western Buddhism is primarily an individual and adult pursuit, not a family affair. This is one of several things that demonstrate, despite all the appearances, Western Buddhism is still not firmly established. Without Buddhist parents bringing up Buddhist kids, no enduring Buddhist community or identity can evolve. And without that, Buddhism may prove to be just a passing fad. However, things are starting to change and the best sign of this is the number of Buddhist kids books now available.

Sometimes Buddhist parents say things like, 'Of course I'm not bringing up Kyle as a Buddhist. I believe that every child should freely choose their own path.' There are serious problems with this (pseudo-liberal?) attitude. If the Dhamma is good enough for you, why isn’t it good enough for Kyle? Exposing your kids to the Dhamma doesn't mean you are robbing them of their freedom to choose. They can (and probably will) make up their own minds later anyway. There's a lot of superficiality out there, a lot of temptations and a lot of bad ideas. Giving your kids a good foundation in the Dhamma will help them better navigate through life and make good choices.

If Buddhist parents do not teach their children the Dhamma, the only thing that will happen is speeding up the decline of Buddhism or making it come about sooner if the decline has not begun.

Some Vajrayana groups, such as Shambhala Mountain have made some progress. They have family programs, even retreats for the whole family. Some Theravada / Vipassana centers have also made progress, including the S. N. Goenka groups which have retreats for children and teenagers and Spirit Rock, which also has family programs.