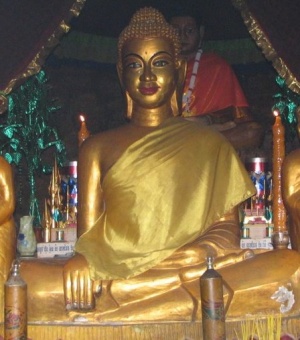 Dhammadinna was the wife of a merchant. She and her husband became Buddhists and she decided to ordain as a bhikkhuni (nun). Shortly thereafter she became enlightened (arahant). Her husband progressed well, but to the stage of non-returner, which is not yet enlightened. She surpassed her husband, which became one of many examples of where women exceeded either their husbands or their teachers in spiritual progress, once again showing the gender equality in the teachings of the Buddha. On one occasion Ven. Dhammadinna was giving a Dhamma talk and the Buddha sat silently and listened. After the talk, the Buddha said that he could not have said (the teachings) it any better and praised her vigorously.