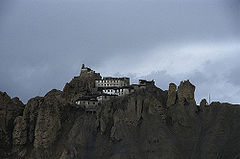 Dhankar Gompa (also spelled as Dhangkar Gompa) is a Gompa, a Buddhist temple in the district of Lahul and Spiti in India. It is situated at an elevation of 3,890 meters (12,762 feet) in the Spiti Valley between the towns of Kaza and Tabo. The complex is built on a 300 meter (984 foot) high spur overlooking the confluence of the Spiti and Pin Rivers one of the world's most spectacular settings for a gompa. Dhang or dang means cliff, and kar or khar means fort. Hence Dhangkar means fort on a cliff. It is one of the highest temples in the world in elevation above sea level. See: List of Buddhist Records and Trivia.

There is a small museum in the gompa.

Below the Gompa lies the small village of Shichilling which contains the new Dhankar Monastery, home to about 150 monks belonging to the Gelugspa School of Order. Dhankar was the traditional capital of the Spiti Valley Kingdom during the 17th century and has some features dating back to the 12th century. Beyond the surrounding harsh, lunar landscape, notable sights at Dhankar Gompa include a statue of Vairochana (Dhayan Buddha) consisting of 4 figures seated back to back in addition to various crumbling thangkas.

In 2006, World Monuments Fund selected Dhankar gompa as one of the 100 most endangered sites in the world. A nonprofit group, Dhangkar Initiative, is attempting to organize its conservation.

Dhankar is approachable by a motorable road, good for small vehicles only, that branches off for Dhankar from the main Kaza Samdu road at a point around 24 km from Kaza. The branch road is 8 km in length up to Dhankar.