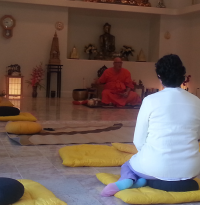 Don Lively formerly known as Ajahn Gatasaro (Tan Don) is a practitioner and teacher of the Dhamma. He was a resident monk in Las Vegas Nevada at Wat Bhodhiyana. He has worked in many fields including craps, blackjack dealer at Las Vegas casinos. He ordained in year 2013 under Ajahn Chalee and then disrobed in January 2014.