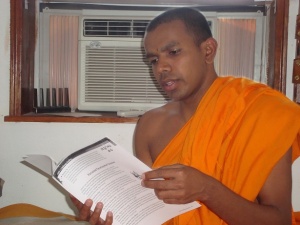 Venerable Dhammaratana had the correct training and upbringing in Sri Lanka to impart his knowledge and expertise for the progress of the Nevada Buddhist Temple.

The Venerable Monk was born in Sri Lanka, an island-nation beyond the southern tip of India with a Buddhist population of 68% having remarkable inter-religious build up over a century with amazing religious tolerance. It is this background that this venerable monk has brought to Las Vegas to interact with those who are interested in the Buddhist philosophy but belong to non-Buddhist denominations.

After having his primary and secondary education,Venerable Dhammaratana entered the priesthood in the year 1990 in the city of Gampola a rural town at the center of the nation. He studied the Buddhist philosophy at a Buddhist seat of learning at Buwanekaba Pirivena in the city of Gampola. After successfully completing his Buddhist education he was qualified to have higher ordination of the Buddhist Order, an essential step toward greater heights of the Order. He was awarded the Higher Ordination in 1998.

Beside his education of the Buddhist Philosophy, the Venerable monk had his higher education in at the University of Peradeniya in Sri Lanka in in the year 2001. He accumulated experience in managing Buddhist institute when he was in New Delhi, India as the assistant in charge of an institute that was propagating and teaching the Buddhist philosophy.

He had his academic stint during 2005 through 2007 at the Walahanduwa Buddhist (Vihara) institute in Sri Lanka’s deep south city of Galle.

Since 2007 Venerable Dhammaratana has been the resident monk at the Las Vegas, Nevada Buddhist Vihara.