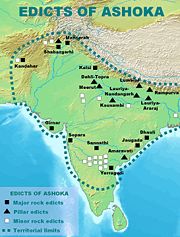 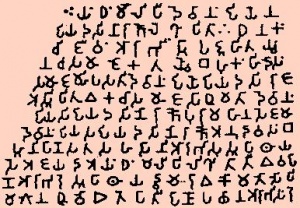 The Edicts of Ashoka are a collection of 33 inscriptions on the Pillars of Ashoka, as well as boulders and cave walls, made by the Emperor Ashoka of the Mauryan dynasty during his reign from 272 to 231 BC. These inscriptions are dispersed throughout the areas of modern-day Pakistan and northern India, and represent the first tangible evidence of Buddhism. The edicts describe in detail the first wide expansion of Buddhism through the sponsorship of one of the most powerful kings of Indian history. According to the edicts, the extent of Buddhist proselytism during this period reached as far as the Mediterranean, and many Buddhist monuments were created.

The inscriptions proclaim Ashoka's beliefs in the Buddhist concept of Dhamma and his efforts to develop the Dhamma throughout his kingdom. Although Buddhism and the Buddha are mentioned, the edicts of Ashoka tend to focus on social and moral precepts rather than religious practices. No mention is made of the philosophical dimension of Buddhism, such as The Four Noble Truths or The Noble Eightfold Middle Path. This could possibly be because Ashoka wanted to remain simple in his message to the public, because these notions may have been formalized at a later date, or some combination of the two.

In these inscriptions, Ashoka refers to himself as "Beloved of the Gods" and "King Priya-darshi." The identification of King Priya-darshi with Ashoka was confirmed by an inscription discovered in 1915. The inscriptions found in the eastern part of India were written in the Magadhi language, using the Brahmi script. In the western part of India, the language used is closer to Sanskrit, using the Kharoshthi script, one extract of Edict 13 in the Greek language, and one bilingual edict written in Greek and Aramaic.

The inscriptions revolve around a few repetitive themes: Ashoka's conversion to Buddhism, the description of his efforts to spread Buddhism, his moral and religious precepts, and his social and animal welfare program. The major rock edict in Girnar details Ashoka's plans to gradually phase out the consumption of meat in his kingdom as he forbids the slaughtering and eating of certain animals on certain days and then states that eventually all animals will be protected from slaughter all the time.

King Ashoka's acceptance of vegetarianism is highly significant, since this is a controversial issue and he was born in 304 BCE and some scholars state that the Buddha may have died in 383 BCE, making the birth of Ashoka, just 79 years after the passing, parinibbana of Buddha (see: Dates of the life of Buddha). King Ashoka was a devout Buddhist and being that close chronologically to the Buddha could suggest that he was following the First Precept the way the early Buddhists did (by refraining from killing and practicing vegetarianism).

http://www.accesstoinsight.org/lib/authors/dhammika/wheel386.html (full text of all edicts)