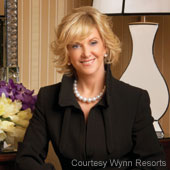 Mrs. Elaine P. Wynn (1943- ) has served as a director for Wynn Resorts since October 2002, and is an active collaborator in the operation of Wynn Las Vegas. In addition to her corporate responsibilities, Mrs. Wynn has also served as Co-Chairperson of the Greater Las Vegas After-School All-Stars since 1996 and is the Founding Chairperson of Communities-in-Schools in Nevada. In addition, in October, 2007, she was named National Chairperson for Communities-in-Schools. She is currently on the State Council to Establish Academic Standards in Nevada. Mrs. Wynn served as a director for Mirage Resorts, Incorporated from 1976 until 2000. She and her husband are Buddhist. Mrs. Wynn is married to Stephen A. Wynn.