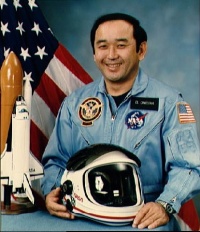 Ellison Shoji Onizuka (June 24, 1946 - January 28, 1986) was a Japanese American astronaut from Kealakekua, Kona, Hawaii who died during the destruction of the Space Shuttle Challenger, where he was serving as Mission Specialist for mission STS-51-L. He was the first Asian American to reach space. He was a Buddhist.

Ellison Onizuka was the oldest son and second youngest child of the late Masamitsu and Mitsue Onizuka. He had two older sisters, Shirley and Norma, and a younger brother, Claude. Claude became the family spokesman when Ellison attained fame as an astronaut and continued after the Challenger accident.

He graduated from Konawaena High School in Kealakekua in 1964. He received a Bachelor's degree in aerospace engineering in June 1969, and a Master's in that field in December of the same year, from the University of Colorado at Boulder. He participated in Air Force ROTC during his time there and is an alumnus of Triangle Fraternity.

Onizuka married Lorna Leiko Yoshida on June 7, 1969, while completing his studies at the University of Colorado. They had two daughters, Janelle Onizuka-Gillilan (b. 1969) and Darien Lei Shizue Onizuka-Morgan (b. 1975).

From August 1974 to July 1975, Onizuka attended the U.S. Air Force Test Pilot School. In July 1975, he was assigned to the Test Flight Center at Edwards Air Force Base in California. He became a squadron test flight engineer at the Test Pilot School, and later worked as a manager for engineering support in the training resources division. His duties there were based on the instruction of courses and the management of the airship fleet (A-7, A-37, T-38, F-4, T-33, and NKC-135) being used for the Test Pilot School and Test Flight Center. Onizuka managed to register more than 1,700 flight hours.

Ellison was born in Hawaii and buried at the National Memorial Cemetery of the Pacific in Honolulu, Hawaii.

At the time of his death, Onizuka held the rank of Lieutenant Colonel. Posthumously, Onizuka was promoted to the rank of Colonel.