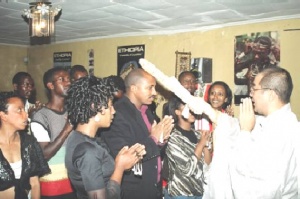 In Ethiopia, Buddhists must meet privately in their homes since "new" religions are not allowed to construct temples

In Ethiopia, the only recognized religions are Christianity, Islam, and Judaism. Thus, it has been virtually impossible for any of the Buddhist missionary organizations to make any efforts in this nation.

King Ashoka's missions may have even went as far as Africa. In East Africa, the Ethiopian Orthodox church currently uses an eight sided wheel on the top of their churches and the nuns wear yellow robes.

It is estimated that about 0.02% of Africans are Buddhist, currently the lowest percentage of all continents. In Ethiopia, it may even be lower, perhaps 0.01%