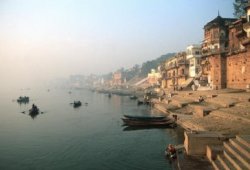 The Ganges (Gaṅgā) is the longest river in India and flows through the Middle Land, that part of India where the Buddha lived. It was also sometimes called Bhāgīrathī (J.V,255).

The river’s great size and beauty and its ability to both nourish crops and to sweep away villages when in flood meant that it was looked upon with a mixture of reverence and awe. A character in the Jatāka says: ‘I revere the Ganges whose waters flow and spread’ (J.V,93). Hindus believed, as they still do, that the river’s waters wash away the effects of any evil they have done, a belief which the Buddha criticized (M.I,39). The Milky Way was called the Celestial Ganges (Ākāsagaṅgā, Ja.II,65). Predictably, the commentaries give a completely fantastic description of the river’s source and first reaches, saying that it starts from Lake Anotatta, rises up into the air and then passes through several rock tunnels before flowing into India. The Tipiṭaka says nothing about the source of the Ganges other than that it starts somewhere in the Himalayas. The Jatākas often say that when the Bodhisattva was an ascetic in his former lives, he went into the Himalayas and made a hermitage near a bend in the Ganges (e.g. Ja.II,145; II,258) The upper reaches of the Ganges were called Uddhagaṅgā (Ja.II,283), the Yamuna join it at Payāga (modern Allahabad, Ja.II,151) and the river eventually flows into the sea (A.IV,199).

The Buddha often used the Ganges as a simile or metaphor in his teachings (e.g. M.I,225; S.II,140; S.IV,298). When he wanted to give the idea of the incalculable amount of something he would say that it was as numerous as the grains of sand in the Ganges (S.IV,376), a simile later often used in Mahāyāna literature. When he wanted to emphasize the effectiveness of his teachings for attaining Nirvāṇa he used the inevitable, unstoppable eastward movement of the Ganges to illustrate this idea. He said: ‘Just as the Ganges flows, slides, tends towards the east, so too, one who cultivates and makes much of the Noble Eightfold Path flows, slides tends towards Nirvāṇa’ (S.V,40).

When the Buddha left Pāṭaliputta (now Patna) during his last journey, he had to cross the Ganges in order to get to Vesāli. Today the river at this point is nearly a kilometer wide and it probably just as wide in ancient times too. The townspeople who had come to bid him goodbye began walking up and down along the bank of the river looking for a ferry or a boat to use to cross the river. Some even began binding reeds together in an attempt to make rafts. Then, according to the Mahāparinibbāna Sutta, ‘as quickly as a strong man might stretch out his arm and draw it back again, the Buddha and his monks vanished from this bank and reappeared on the other bank of the Ganges' (D.II,89). Those who believe in an essential unity between Buddhism and Christianity often site this incident as being a parallel to the story about Jesus walking on the water (Mark 6,45-52). The comparison is, however, a spurious one. Whoever wrote the story about Jesus’ walking on the water believed it to be literally true and presented it as proof of Jesus' divinity. Many Christians still accept it as such. The story about the Buddha crossing the Ganges does not have him walking on the surface of the river but rather disappearing from one place and reappearing in on another. But more importantly, the Buddhist story is not meant to be taken literally, although some people may well have done so. It is an example of a didactic embellishment - a story meant to hold the attention and then make an important point - a literary device often used in the Pāḷi Tipiṭaka and other Indian literature. The point being made with this story is that no matter how difficult attaining enlightenment may seem, the fact that others have done it should give us the encouragement and determination to attain it too. This is confirmed by what happens at the end of the story. The Buddha looks back across the river, sees the people still running up and down along the riverbank and says: 'When they want to cross the ocean, the lake or the pond, people make a bridge or a raft. But the wise ones have already crossed over' (D.II,89).