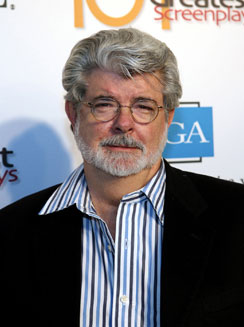 George Walton Lucas, Jr. (born May 14, 1944) is an Academy Award-winning American film producer, screenwriter, director and chairman of Lucasfilm Ltd. He is best known for being the creator of the epic Sci-Fi franchise Star Wars and the archaeologist-adventurer character Indiana Jones. Today, Lucas is one of the American film industry's most financially successful independent directors/producers, with an estimated net worth of $3.9 billion.

In 1969, Lucas married film editor Marcia Lou Griffin, who went on to win an Academy Award for her editing work on the original (Episode IV) Star Wars film. George and Marcia adopted a daughter, Amanda, in 1981, and divorced in 1984. Lucas has since adopted two more children: Katie, born in 1988, and Jett, born in 1993. All three of his children have appeared in the three Star Wars prequels, as has Lucas himself. Lucas had been in a long relationship with and engaged to singer Linda Ronstadt. He has been dating Mellody Hobson, president of Ariel Investments, since 2007 and she has accompanied him to several events including the 79th Academy Awards ceremony in February 2007, an American Film Institute event in October 2007 and the 2008 Cannes Film Festival held in May. He supported Barack Obama for President in 2008.

Lucas was born and raised in a strongly Methodist family. After inserting religious themes into Star Wars, he would eventually come to identify strongly with the Eastern religious philosophies he studied and incorporated into his movies, which were a major inspiration for "the Force." Lucas eventually came to state that his religion was "Buddhist Methodist." Lucas resides in Marin County.