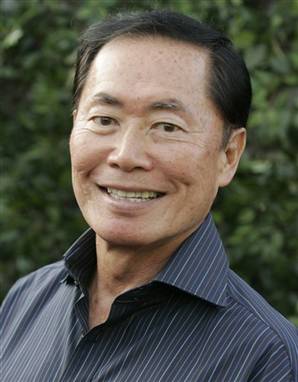 George Hosato Takei Altman (born April 20, 1937) is an American actor, best known for his role in the television series Star Trek, in which he played Hikaru Sulu, helmsman of the USS Enterprise. He played the father of Hiro Nakamura, Kaito Nakamura, on the NBC television show Heroes. Takei is also known for his baritone voice, and has been the announcer for The Howard Stern Show since January 9, 2006 when the show moved to SIRIUS XM Radio. In 2008, Takei came third in the eighth series of the British reality series I'm a Celebrity... Get Me out of Here!

In October 2005, Takei revealed in an issue of Frontiers magazine that he is gay and has been in a committed relationship with his partner, Brad Altman, for the last eighteen years. He said, "It's not really coming out, which suggests opening a door and stepping through. It's more like a long, long walk through what began as a narrow corridor that starts to widen." Nevertheless, Takei's sexuality had been an open secret among Star Trek fans since the 1970s, and Takei did not conceal his active membership in LGBT organizations including Frontrunners where he developed public friendships with fellow Frontrunners Kevin Norte and his partner Don Norte prior to Takei's coming out in 2005. In an on-air telephone interview with Howard Stern, in December 2005, Takei explained, "[LGBT people] are masculine, we are feminine, we are caring, we are abusive. We are just like straight people, in terms of our outward appearance and our behavior. The only difference is that we are oriented to people of our own gender." Takei also described Altman as "a saint" for helping to take care of Takei's terminally ill mother.