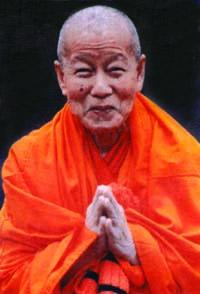 Pacifist, ethical vegetarian, author and Supreme Patriarch of Cambodian Buddhism for teaching non-violence and establishing Buddhist temples throughout the world that root his exiled people in their religion of peace. The Peace Abbey, in Sherborn, MA, awarded him with the Courage of Conscience award.

He was born in Takéo Province, Cambodia in 1929, to a farming family in the Mekong Delta plains. From an early age he showed great interest in religion, and began to serve as a temple boy at age eight. He greatly impressed the monks with whom he served, and at age fourteen received novice ordination. He studied Pali scriptures in the local temple high school, then went on to complete his higher education at the monastic universities in Phnom Penh and Battambang, before going to India to pursue a doctorate in Pali at Nalanda University in Bihar.

Maha Ghosananda trained under some of the most highly influential Buddhist masters of his time, including the Japanese monk Nichidatsu Fujii, and the Cambodian Patriarch Samdech Preah Sangharaja Chuon Nath.

In 1965, Maha Ghosananda left Cambodia to study meditation under Ajahn Dhammadaro, of Wat Chai Na forest temple near Nakorn Sri Dhammaraj in Southern Thailand, a famous meditation master of the Thai Forest Tradition. Four years later, while he was still studying at Dhammadaro's forest monastery, the United States began bombing Cambodia as part of their attempt to shut down the Ho Chi Minh Trail and end the Vietnam War. Cambodia became engulfed in civil war and social disintegration.

As the Khmer Rouge seized control of the country, the prospects of Buddhism became increasingly doubtful. Pol Pot, who had once served in a Buddhist monastery, denounced Buddhist monks as useless pariah, and part of the feudalistic power structures of the past. Monks were viewed with suspicion and disdain as part of the intellectual class, and targeted for especially brutal treatment and "reeducation".

As part of the Khmer Rouge horrific Year Zero campaign, monks were systematically turned out of monasteries and forced to disrobe and become farming peasants, or were tortured and murdered outright. Some monks were forced to violate their vows at gunpoint. By the time the Khmer Rouge reign of terror ended, there were no monks alive in Cambodia, and most temples were in rubble.

Meanwhile, refugees began to filter out of Cambodia and congregate in refugee camps along the Thai border, bringing with them tales of unbelievable, apocalyptic horrors.

In 1978, Maha Ghosananda left his forest hermitage in Thailand, and went down to the refugee camps near the Thai-Cambodia border to begin ministering to the first refugees who filtered across the border.

Maha Ghosananda was one of the few Cambodian monks to survive the brutal purge instigated by Pol Pot and the Khmer Rouge.

His entire family, and countless friends and disciples, were massacred by the Khmer Rouge.

Maha Ghosananda served as a key figure in post-Communist Cambodia, helping to restore the nation state and to revive Cambodian Buddhism. In 1980, he served as a representative of the Cambodian nation-in-exile to the United Nations

In 1988, Maha Ghosananda was elected as sanghreach (sangharaja) by a small gathering of exiled monks in Paris. He agreed to accept the position provisionally, until a complete, independent monastic hierarchy could be established in Cambodia. At the time, Venerable Tep Vong was the titular head of a unified Cambodian sangha, having been appointed to the position in 1981 by the Vietnamese-backed People's Republic of Kampuchea.

In 1992, during the first year of the United Nations sponsored peace agreement, Maha Ghosananda lead the first nation-wide Dhammayietra, a peace march or pilgrimage, across Cambodia in an effort to begin restoring the hope and spirit of the Cambodian people.

The 16-day, 125-mile peace walk passed through territory still controlled by the Khmer Rouge. Afterwards, he led numerous other peace walks across Cambodia, accompanied with as many as 200 people each year.

He had been called "the Gandhi of Cambodia." Maha Ghosananda was nominated for the Nobel Peace Prize by the chair of the U.S. Senate Foreign Relations Committee, Claiborne Pell. He was again nominated in 1995, 1996, and 1997 for his work in bring peace to Cambodia. He also acted as an advisor to the Buddhist Peace Fellowship and resided part time in the Palalai Temple in Philadelphia, Pennsylvania, United States.