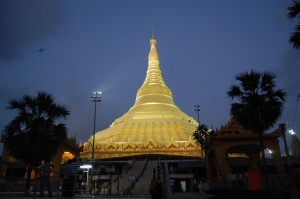 It is being built combining ancient Indian and modern technology to enable it to last for at least 2000 years. The center of the Global Pagoda contains the world's largest stone dome built without any supporting pillars. The planned height of the building is 96.12 meters, which is twice the size of the previously largest hollow stone monument in the world, the Gol Gumbaz Dome in Bijapur, India.

The inside of the pagoda is hollow and serves as a very large meditation hall with an area covering more than 6000 m2 (65,000 ft2). The massive inner dome seats over 8000 people enabling them to practice the non-sectarian Vipassana meditation as taught by Mr S. N. Goenka (who led this project to build this structure) and now widely being practiced in over 100 countries, including in many prisons such as Asia's largest prison, Tihar Jail, New Delhi, India.

Relics of Gotama the Buddha were enshrined in the central locking stone of the dome on October 29, 2006, making it the world's largest structure containing the bone relics of the Buddha.

The aim of the pagoda complex is, among others, to express gratitude to Buddha for dispensing for what followers believe is a universal teaching for the eradication of suffering, to educate the public about the life and teaching of the Buddha, and to provide a place for the practice of meditation.

The Global Pagoda complex is still under construction with plans to include a museum depicting the life and teaching of Buddha that is expected to draw hundreds of thousands of visitors annually. The Global Pagoda's educational displays will communicate the Buddha's universal teaching as a path towards real happiness.