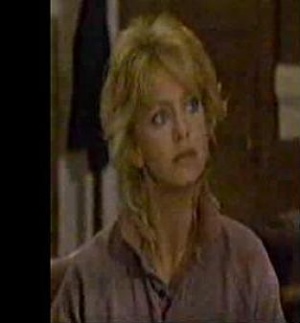 Goldie Hawn from the 1986 movie, Wildcats

Hawn was born Goldie Jean Hawn in Washington, D.C., the daughter of Laura (née Steinhoff), a jewelry shop/dance school owner, and Edward Rutledge Hawn, a band musician who played at major events in Washington. She has a sister, Patricia; a brother, Edward, died before she was born. She was raised in Takoma Park, Maryland. Hawn's father, a descendant of Edward Rutledge (a signer of the Declaration of Independence), was Presbyterian, and Hawn's mother was Jewish, the daughter of immigrants from Hungary;[1] Hawn was raised in the Jewish religion.

Hawn began taking ballet and tap dance lessons at the age of three, and danced in the chorus of the Ballet Russe de Monte Carlo production of The Nutcracker in 1955. She made her stage debut in 1961, playing Juliet in a Virginia Stage Company production of Romeo and Juliet. By 1964, she ran and instructed a ballet school, having dropped out of American University, where she was majoring in drama. In 1964, Hawn, who graduated from Montgomery Blair High School (Class of 1963) , made her professional dancing debut in a production of Can-Can at the Texas Pavilion of the New York World's Fair. She began working as a professional dancer a year later, and appeared as a go-go dancer in New York City.

Hawn became involved in Eastern philosophy in 1972. She was raised Jewish but is now a practising Buddhist and has raised her children in both Buddhist and Jewish traditions. She has stated on the Larry King Show that she is a Jewish Buddhist (JuBu), but neither more Jewish nor more Buddhist. Even though she might have converted to Buddhism, she has said in an interview that she never had to forsake her Jewish heritage to embrace Buddhism. Hawn travels to India annually, and has visited Israel, stating that she felt a strong identification with its people. She was criticized, by pro-Palestinians, for lending out her support for Israel and for the Jewish National Fund.

Hawn founded and funds the Goldie Hawn Institute, formerly called the Bright Lights Foundation. The institute teaches the Buddhist technique of mindfulness training; where fourth through seventh graders are instructed in mindful awareness techniques and positive thinking skills, then tested for changes in behavior, social and emotional competence, and moral development. One school official reports that in one classroom, the children went from having the most behavioral problems, to having zero behavioral problems.

Hawn realizes that many parents oppose bringing Buddhist methods into public schools, and recently stated in Greater Good magazine, published by Greater Good Science Center: "There will always be people who see this as scary, or as some kind of Eastern philosophy that they don't want for their kids." Hawn adds, "Mindfulness gives kids a tool for understanding how their brain works, for having more self-control".