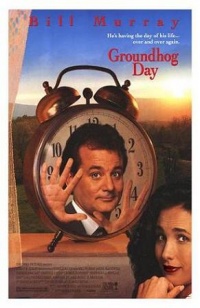 Groundhog Day is a 1993 comedy film directed by Harold Ramis, starring Bill Murray and Andie MacDowell. It was written by Ramis and Danny Rubin, and based on a story by Rubin. In the film, Murray plays Phil Connors, an egocentric Pittsburgh TV weatherman who, during a hated assignment covering the annual Groundhog Day event (February 2) in Punxsutawney, finds himself repeating the same day over and over again. After indulging in all manner of hedonistic pursuits, then going through a suicidal streak, he begins to reexamine his life and priorities. In 2006, Groundhog Day was added to the United States National Film Registry as being deemed "culturally, historically, or aesthetically significant."

Self-centered and sour TV meteorologist Phil Connors (Bill Murray), his producer Rita (Andie MacDowell), and cameraman Larry (Chris Elliott) from the fictional Pittsburgh television station WPBH-TV9 travel to Punxsutawney, Pennsylvania to cover the annual Groundhog Day festivities with Punxsutawney Phil. Having grown tired of this assignment, the small town and his crew members, Phil grudgingly gives his report and attempts to return back to Pittsburgh when a blizzard (which he predicted would miss the area) shuts down the main roads. Phil and his team are forced to stay in town an extra day.

Phil wakes up to find that he is reliving February 2 again. The day plays out exactly as it did previously, with everyone else seemingly unaware of the time loop, though Phil remains aware of the events of the previous day. At first he is confused, but, when he continues to wake up every day at the start of February 2, he starts to try to take advantage of the situation without fear of long-term consequences and with his prior knowledge of what is going to happen: he learns secrets from the town's residents, seduces women, steals money and drives drunk. However, his attempts to get closer to Rita are repeatedly shut down. Eventually, Phil becomes despondent and tries more and more drastically to end the time loop; he gives ridiculous and offensive reports on the festival, abuses residents and eventually, during one "day", he kidnaps Punxsutawney Phil and after a long police chase, drives over a cliff, appearing to kill both himself and the groundhog. However, Phil wakes up in the next loop and finds that nothing has changed; further attempts at suicide are just as fruitless as he continues to find himself back at the start of February 2.

When Phil explains the situation to Rita, she suggests that he should take advantage of it to improve himself. Inspired, Phil endeavors to try to learn more about Rita, building upon his knowledge of her and the town each day. He begins to use his by now vast experience of the day to help as many people around town as possible. He also uses the time to better himself, learning to play jazz piano, ice sculpting, and French, among other things. Eventually, Phil is able to befriend almost everyone he meets during the day, using his experiences to save lives, help all manner of townspeople and to get closer to Rita. He crafts a report on the Groundhog Day celebration so eloquent that all the other stations turn their microphones to him. After the evening dance, Rita and Phil retire together to Phil's room. Phil has had the perfect day.

Phil wakes up the next morning and finds the time loop is broken; it is now February 3 and Rita is still in bed with him. Phil is a completely different person from who he was on February 1, and after going outside Phil and Rita talk about living in Punxsutawney together.

This movie makes it to almost every Buddhist themed movie list because Phil goes through the same day over and over in the same way we go through samsara until we "get it right."