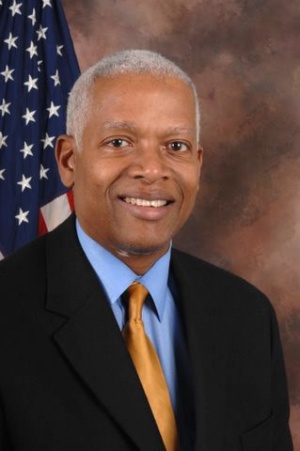 Henry C. Johnson Jr. (born 1954 and commonly known as Hank Johnson) is a member of the U.S. House of Representatives, representing Georgia's Fourth Congressional District. The district is based in DeKalb County, a largely suburban county east of Atlanta. It also includes portions of Gwinnett and Rockdale counties. A Democrat, Johnson was elected to the U.S. House in the November 7, 2006 general election. Johnson is—along with Mazie Hirono of Hawaii, also elected to Congress in 2006—one of the first two Buddhists in American history to serve in the United States Congress. Johnson is a member of the House Democratic leadership, elected by the Democratic caucus to serve as whip for Georgia, Alabama, Mississippi, and Florida. Johnson serves on the House Armed Services and Judiciary committees.

He was elected to the DeKalb County Commission in 2000 and served two terms. Prior to his service on the Commission, he worked as an Associate Magistrate Judge for ten years.

Johnson's wife, Mereda Davis Johnson, is also an attorney; they have two children.

Johnson grew up in Washington, D.C. His father worked for the Bureau of Prisons and was the director of classifications and paroles, up to that time, the highest ranking African American in the bureau.

Johnson is a practicing Buddhist and is a member of Soka Gakkai International.