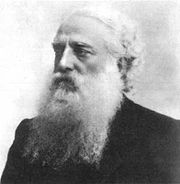 Colonel Henry Steel Olcott (1832–1907), founder and first president of the Theosophical Society, was the first well-known person of European ancestry to make a formal conversion to Buddhism. His subsequent actions as president of the Theosophical Society helped create a renaissance of study of Buddhism. He is still honoured in Sri Lanka for these efforts.

As a child, Olcott lived on his father's New Jersey farm. During his teens he attended the College of the City of New York and Columbia University, where he joined the St. Anthony Hall fraternity, a milieu of well-known people, until his father's business failed during 1851. In 1860 he married Mary Epplee Morgan daughter of the rector of Trinity parish, New Rochelle; they had three sons. Olcott was agricultural editor of the New York Tribune (1858–60), and sometimes submitted newspaper articles on various other subjects. He served in the US Army during the Civil War and afterward was admitted as a lawyer in New York City. With the rank of Colonel, he was special commissioner in the U.S. War and Navy departments (1863–66). He published a genealogy of his family that traced him back to Thomas Olcott, one of the founders of Hartford, Connecticut in 1636.

Some of his newspaper articles concerned the Spiritualist movement. In 1874 while writing a series of articles on the seances of the Eddy brothers of Chittenden, Vermont he met Helena Blavatsky when both visited the Eddy farm. In early 1875 Olcott was asked by important Spiritualists to investigate an accusation of fraud against the mediums Jenny and Nelson Holmes, who had claimed to materialize the famous spirit control Katie King (Doyle 1926: volume 1, 269-277).

During September 1875, Henry, Helena and others, notably William Quan Judge formed the Theosophical Society. During December 1878 they left New York in order to move the headquarters of the Society to India, where it later was established at Adyar. They landed at Bombay Feb 16 1879.[3] Olcott acted as adviser to the committee appointed to design a Buddhist flag. Blavatsky eventually went to live in London where she died, but Henry stayed in India and pursued the work of the society there.

Olcott Road, a major street in Colombo, has been named for him. A statue of him has been built in Maradana. He is still remembered fondly by many Sri Lankans.