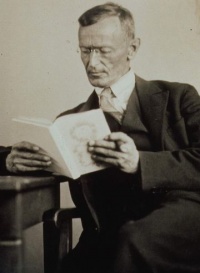 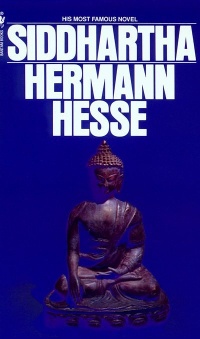 Hermann Hesse (German pronunciation: [ˈhɛʀman ˈhɛsə]) (July 2, 1877 – August 9, 1962) was a German Swiss poet, novelist, and painter. In 1946 he received the Nobel Prize in Literature. His best-known works include Steppenwolf, Siddhartha, and The Glass Bead Game (also known as Magister Ludi) each of which explores an individual's search for authenticity, self-knowledge and spirituality.

Hesse was born in the Black Forest town of Calw in Württemberg, Germany to a Christian missionary family. Both of his parents served with a Basel Mission to India where Hesse's mother Marie Gundert was born in 1842. Hesse's father, Johannes Hesse, the son of a doctor, was born in 1847 in Estonia. The Hesse family had lived in Calw since 1873, where they operated a missionary publishing house under the direction of Hesse's grandfather, Hermann Gundert.

Hesse spent his first years of life surrounded by the spirit of Swabian piety. In 1881, when Hesse was four, the family moved to Basel, Switzerland, staying for six years then returning to Calw. After successful attendance at the Latin School in Göppingen Hesse began to attend the Evangelical Theological Seminary in Maulbronn in 1891. Here in March 1892 Hesse showed his rebellious character and in one instance he fled from the Seminary and was found in a field a day later.

Hesse began a journey through various institutions and schools and experienced intense conflicts with his parents. In May, after an attempt at suicide, he spent time at an institution in Bad Boll under the care of theologian and minister Christoph Friedrich Blumhardt. Later, he was placed in a mental institution in Stetten im Remstal, and then a boys' institution in Basel.

At the end of 1892 he attended the Gymnasium in Cannstatt. In 1893 he passed the One Year Examination which concluded his schooling.

After this Hesse began a bookshop apprenticeship in Esslingen am Neckar but after three days he left. Then in the early summer of 1894 he began a 14-month mechanic apprenticeship at a clock tower factory in Calw. The monotony of soldering and filing work made him resolve to turn himself toward more spiritual activities. In October 1895 he was ready to begin wholeheartedly a new apprenticeship with a bookseller in Tübingen. This experience from his youth he returns to later in his novel Beneath the Wheel.

With the literary fame Hesse married Maria Bernoulli (of the famous family of mathematicians[2]) in 1904, settled down with her in Gaienhofen on Lake Constance, and began a family, eventually having three sons. In Gaienhofen he wrote his second novel Beneath the Wheel, which was published in 1906. In the following time he composed primarily short stories and poems. His next novel, Gertrude, published in 1910, revealed a production crisis—he had to struggle through writing it, and he later would describe it as "a miscarriage."

Gaienhofen was also the place where Hesse's interest in Buddhism was resparked. Following a letter to Kapff in 1895 entitled Nirvana, Hesse ceased alluding to Buddhist references in his work. In 1904, however, Arthur Schopenhauer and his philosophical ideas started receiving attention again, and Hesse discovered theosophy. Schopenhauer and theosophy renewed Hesse's interest in India. Although it was many years before the publication of Hesse's Siddhartha (1922), this masterpiece was to be derived from these new influences.

During this time there also was increased dissonance between him and Maria, and in 1911 Hesse left alone for a long trip to Sri Lanka and Indonesia. Any spiritual or religious inspiration that he was looking for eluded him, but the journey made a strong impression on his literary work. Following Hesse's return the family moved to Bern (1912), but the change of environment could not solve the marriage problems, as he himself confessed in his novel Rosshalde from 1914.