Homosexuality is the tendency to be sexually attracted to persons of the same rather than the opposite gender. Today male homosexuals are called gays while females are referred to as lesbians. According to the ancient Indian understanding, homosexuals were thought of simply as being ‘the third nature’ (tçtãya prakçti), rather than perverted, deviant or sick.

With its emphasis on psychology and cause and effect, Buddhism judges acts, including sexual acts, by the intention behind them and the effect they have. A sexual act motivated by love, mutuality and the desire to give and share would be judged positive no matter what the gender of the two persons involved. Therefore, homosexuality as such is not considered immoral in Buddhism or against the third Precept.

None of the legal codes of traditional Buddhist country criminalized homosexuality per se, although of course there were penalties against homosexual rape and homosexual acts with minors just as there were for such offences committed by heterosexuals. In most Buddhist countries today, homosexuality is usually considered strange although not wicked or evil. Thailand, Laos and Cambodia have no laws against homosexuality between consenting adults. Homosexuality is illegal in Burma and Sri Lanka mainly because their legal codes were in part drawn up during the colonial era. Recently in Sri Lanka, the penalty for homosexuality was increased in an ill-considered response to the growing problem of sex tourism in the country. 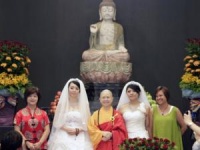 In recent years there has been discussion about governments allowing for gay marriages with some nations and regions allowing it and others passing restrictive laws against it and specifically defining marriage as that between a man and a woman.

In Buddhism, any marriage is not a sacrament, not a requirement and generally considered a secular matter. There is only the precept against sexual misconduct and certainly gay people and heterosexual couples are both capable of breaking this precept or in keeping this precept. Craving is simply craving and one form of craving cannot be judged as "superior" or "inferior" to another. Therefore, there is no objection to gay marraige in Buddhism. Recently, former Star Trek television star, George Takei had a gay marraige in California, led by a Buddhist minister.