Difference between revisions of "Hotei" 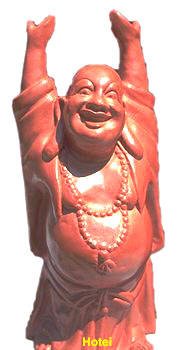 Hotei (830 CE - 902 CE) A Chinese monk from the Chan (precursor to Zen) school. Many people confuse him as THE Buddha, when in fact he was a Buddhist monk. He may have been a buddha, such as an arahant (enlightened), but not THE Buddha of our time. A common statue at Chinese restaurants and temples so that many have confused him as the founder of Buddhism, which is not the case. He is always shown with a big belly as he is said to have enjoyed candy and also passed candy out to children.

He is also known as the laughing Buddha, a character popular in Chinese and Japanese folk belief and has its origins in a welding together of the identities of semi-historical monk Che’tz and the bodhisattva Maitreya (Chinese Mile pusa). Che’tz lived in 10th century China and was widely loved for his eccentric behavior, his way with children and in particular, his open, friendly manner. He was also very obese and used to carry a bag full of knickknacks over his shoulder, for which he was also known as ‘Big Bag Monk’ (Buti’shang). In later centuries, popular imagination came to identify Che’tz with Maitreya, the Buddha of the next era, probably because Maitreya’s name means ‘The Loveable One’ and he too was thought of as being a friendly, benign individual. Eventually, Maitreya came to be depicted like Che’tz; bald-headed, rotund, and broadly smiling or laughing. Although learned Chinese Buddhists always distinguished between the two, the majority of simple folk did not, and gradually looked upon Che’tz/Maitreya as a god of prosperity, abundance and good luck.

In some ways the so-called laughing Buddha is similar to Saint Nicolas in the Christian tradition. He was an entirely legendary character who later became a saint in the Church and eventually evolved into Santa Claus, a friendly old man who dispenses gifts to good children.