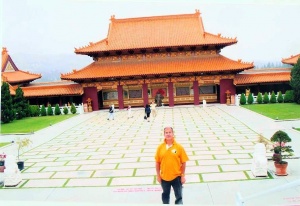 Hsi Lai Temple (TC: 西來寺; PY: Xīlái Sì) (approximate pronunciation She Lye) is a traditional Chinese Buddhist mountain monastery in the United States. It is located on the foothill region of Hacienda Heights, California, USA, a suburb of Los Angeles. The name "Hsi Lai" means Coming West in the sense of the "Great Buddhadharma Coming West."

The temple is affiliated with one of Taiwan's largest religious organizations, the Fo Guang Shan Buddhist order. It is one of the first branch temples the order has built, and is often called the "torch of Dharma" by order members. Hsi Lai was the site of the founding of Buddha's Light International Association, which was established in 1991. The temple, like its mother temple in Taiwan, practices Humanistic Buddhism, which incorporates all of the eight traditional schools of Chinese Buddhism - especially the Linji Chan and Pure Land schools - to provide guidance deemed most useful to modern life.

The temple complex consists of 15 acres and over 100,000 square feet of building space. The complex includes a university (University of the West) where they offer Buddhist and other academic programs, a traditional temple, meditation hall, and large vegetarian dining. It is currently the largest Buddhist temple in the Western Hemisphere.

The spiritual head of the temple is Hsing Yun who teaches a Humanistic Buddhism, consisting primarily of Ch'an (Zen), Pure Land, and some elements of Theravada. Ayya Khema received her full bhikkhuni ordination at Hsi Lai Temple.