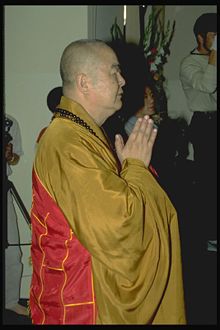 As the founder of the Fo Guang Shan Buddhist Order, one of the largest religious and humanitarian organization in the Republic of China, he is well known and recognized in the international Buddhist community for his humanitarian work, calligraphy, Dharma propagation, and writing. As an active philanthropist, Hsing Yun contributes in pushing forth the ideal of Humanistic Buddhism, a modern Buddhist philosophy preached by many modern teachers of the Buddhist faith. He is well-known among Chinese Buddhists around the world and has received praise from many teachers. So far, more than 5,000 monastic disciples have been tonsured under Hsing Yun, with over a million lay followers worldwide.

Starting in the 1950s, Hsing Yun started making many achievements at an early age. He taught numerous classes, built many schools for children, recorded the first Buddhist hymns, and was promoted as an executive in many Buddhist associations. In 1957, Hsing Yun established a Buddhist cultural center in which a variety of Buddhist books are published with training tools such as audio and visual aids. In 1959, Hsing Yun also supported the Tibetan movement against communist suppression, and organized the first float parade in celebration of Wesak in Taiwan.

Perhaps one of Hsing Yun's influential achievements was his push for Wesak to become a national holiday in Taiwan, a wish that had been granted by former ROC President Lee Teng-hui in 2000. However, it is not celebrated officially by all of the people in the ROC.

Hsing Yun was one of eight venerables who proposed the World Buddhist Forum in China in 2004, a suggestion that won support from Buddhist circles in countries like Japan and the Republic of Korea.

Expansion of the Dharma

In 1967, Hsing Yun purchased more than 30 hectares in Ta Shu Township, Kaohsiung County as the site for the construction of a monastery. The groundbreaking ceremony was held on May 16th. He began by building the colleges and their dormitories, and working slowly towards building the shrines.

During that time that was spent clearing the mountains, the endless toiling away, wave upon wave of physical strain, the planning that carried on into all hours of the day, the barrage of floods and other natural disasters, and the belligerent mobs that surrounded the mountain were all quite beyond description. On windy and sunny days, the workers clothes would be soaked in sweat, dried up, and then soaked up again. They would be discussing throughout the day and go to bed late at night, and then as soon as the sun came out, they would work again. However, in the momentum of an incomparable courage, and by the blood and sweat of the laborers, the vast wilderness was transformed into the scenic Fo Guang Shan today.