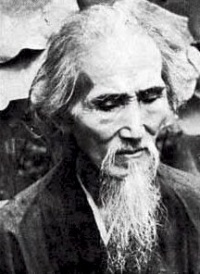 Hsu Yun (also: Xu Yun; Chinese: 虚云; pinyin: Xūyún; born Xiao Guyan Chinese: 萧古巖; August 26, 1840 – October 13, 1959) was a renowned Chán (precursor to Zen) Buddhist master and one of the most influential Buddhist teachers of the 19th and 20th centuries. He is often noted for his unusually long lifespan, having living to age 119. He was a vegetarian.

Hsu Yun was born on August 26 in Fukien, in Imperial China. His mother died during childbirth. In the 30th year of the Tao Kuang reign period (1850), when he was eleven years old, his father returned to Quanzhou. The aging grandmother of the Chou clan was determined that her grandson would have a wife. In order to continue both his and his uncle's lineage, Hsu Yun was to marry one woman from the T'ien family and one from the T'an family.

is first exposure to Buddhism was during the funeral of his grandmother. Soon afterward he began reading the Sutras, and later made a pilgrimage to Nanyo. When he was fourteen years old, he announced that he wished to renounce the material world in favour of monastic life. His father did not approve of Buddhism and had him instructed in Taoism instead. From the start, Hsu Yun was dissatisfied with Taoism, which he felt could not reach the deeper truths of existence. The storerooms of his house were full of very old books. Going through them, he found a volume called the 'Story of Incense Mountain', which described the life of Avalokiteshvara (Bodhisattva Kuan Yin). After reading the book, he was deeply influenced and was aspired to go forth from the home-life to monkhood to practice the Buddhist Path in the future. He didn't want to be an official nor to be a wealthy man. He decided that a life of simplicity would exemplify his resolution to practice pure and lofty ideals.

When Hsu Yun was seventeen, he had already undergone the hardship of practicing Taoism for three years and was indeed disappointed. He constantly thought about leaving the home-life and joining the Buddhist Sangha. One day in his uncle's absence he attempted to flee to Nan Yo to shave his head and officially leave the home-life. Little did he know that on a winding mountain path he would encounter envoys sent by his uncle to intercept and escort him back. His aspiration was not realized and he was reproved and brought back home. When Hsu Yun arrived home, the family feared that he would escape again, so he was sent with his first cousin, Fu Kuo, to Quanzhou. His father formally received the brides from the Tian and Tan families for Hsu Yun, and his marriage was completed. Hsu Yun, however, had already realized the emptiness of form. He held no view of a self or of others and had not the slightest thought of desire. He was clear of mind and pure in body. Therefore, although they dwelt together, he remained undefiled. Moreover, he extensively explained the Buddhadharma for the two women so that they too would practice the Buddhist Path.

There was a deep bond of brotherly friendship and respect between Hsu Yun and Fu Kuo. Fu Kuo also had previously explored the Buddhadharma and had the same aspiration as Hsu Yun, so they amicably traveled the Path together. In his nineteenth year, accompanied by Fu Kuo, he started the journey to Gu Shan (Drum Mountain) in Fuzhou to leave home. Before leaving, he wrote the "Song of the Skinbag" which he left behind for his two wives (the T'ien and T'an women). It was at Gu Shan monastery that his head was shaved and he received ordination as a monk. When his father sent agents to find him, Hsu Yun concealed himself in a grotto behind the monastery, where he lived in austere solitude for three years. At the age of twenty-five, Hsu Yun learned that his father had died, and his stepmother and two wives had entered the monastic life.

During his years as a hermit, Hsu Yun made some of his most profound discoveries. He visited the old master Yung Ching, who encouraged him to abandon his extreme asceticism in favor of temperance. He instructed the young monk in the Sutras and told him to be mindful of the Hua Tou, "Who is dragging this corpse of mine?" In his thirty-sixth year, with the encouragement of Yung Ching, Hsu Yun went on a seven-year pilgrimage to Mount Putuo off the coast of Ningbo, a place regarded by Buddhists as the bodhimandala of Avalokiteshvara. He went on to visit the monastery of King Asoka, and various other Chán holy places.

At age forty-three, Hsu Yun had by now left the home life for more than twenty years, but he had not yet completed his practice in the Path. He had not repaid his parents' kindness, and so he vowed to again make a pilgrimage to Nan Hai. From Fa Hua Temple all the way to Ch'ing Liang Peak at Mount Wutai of the northwest, the bodhimandala of Manjushri, he made one full prostration every three steps. He prayed for the rebirth of his parents in the Pure Land. Along the way, Hsu Yun is said to have met a beggar called Wen Chi, who twice saved his life. After talking with the monks at the Five-Peaked Mountain, Hsu Yun came to believe that the beggar had been an incarnation of Manjushri.

Having achieved singleness of mind, Hsu Yun traveled west and south, making his way through Tibet. He visited many monasteries and holy places, including the Potala, the seat of the Dalai Lama, and Tashilhunpo Monastery, the seat of the Panchen Lama. He traveled through India and Ceylon, and then across the sea to Burma. During this time of wandering, Hsu Yun felt his mind clearing and his health growing stronger.

Hsu Yun composed a large number of poems during this period.

When Hsu Yun was fifty-six, the Abbot Yue Lang of Gaomin Temple)in Yangzhou was going to convene a continuous twelve-week session of dhyana meditation. Preparing to leave, the group asked Hsu Yun to go first. After reaching Di Gang, he had to cross the water, but had no money. The ferry left without him. As he walked along the river's edge, he suddenly lost his footing and fell into the rushing water, where he bobbed helplessly for a day and night and was caught in a fisherman's net. He was carried to a nearby temple, where he was revived and treated for his injuries. Feeling ill, he nevertheless returned to Yangzhou. When asked by Gao Ming whether he would participate in the upcoming weeks of meditation, he politely declined, without revealing his illness. The temple had rules that those who were invited had to attend or else face punishment. In the end, Gao Ming had Hsu Yun beaten with a wooden ruler. He willingly accepted this punishment, although it worsened his condition.

For the next several days, Hsu Yun sat in continuous meditation. In his autobiography, he wrote: "[in] the purity of my singleness of mind, I forgot all about my body. Twenty days later my illness vanished completely. From that moment, with all my thoughts entirely wiped out, my practice took effect throughout the day and night. My steps were as swift as if I was flying in the air. One evening, after meditation, I opened my eyes and suddenly saw I was in brightness similar to broad daylight in which I could see everything inside and outside the monastery..." But he knew that this occurrence was only a mental state, and that it was not at all rare. He did not become attached to this achievement, but continued his single-minded investigation of the topic, "who is mindful of the Buddha?" over and over again, he delved into this topic without interruption.

Hsu Yun tiredlessly worked as a bodhisattva, teaching precepts, explaining sutras, and restoring old temples. He worked throughout Asia and did not confine himself to one country. His large following was spread across Burma, Thailand, Malaya, and Vietnam, as well as Tibet and China. Hsu Yun remained in China during World War II and after the rise of the People's Republic of China to support the Buddhist communities rather than retreat to the safety of Hong Kong or Taiwan. After the Communists took over mainland China, he and his disciples were mistreated and tortured. In 1953, along with Dharma Master Yuan Ying and others, Hsu Yun formed the Chinese Buddhist Association at Kuang Chi (Extensive Aid) Monastery. He was nominated for the office of President, but he declined because of old age and ill health and assumed the title of Honorary President.

In 1959, Hsu Yun's age was 119, and he became ill during the summer and fall. On the twelfth day of the ninth lunar month, he knew that the time had come. Hsu Yun instructed his successors to earnestly and vigorously apply themselves to the cultivation of precepts, samadhi, and wisdom, in order to counteract greed, anger, and stupidity. Telling them to forget themselves for the sake of the Dharma and to mutually cherish and respect one another.