Difference between revisions of "Jack Dorsey" 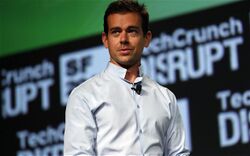 Jack Patrick Dorsey (born November 19, 1976) is an American computer programmer and Internet entrepreneur who is the co-founder and CEO of Twitter, and the founder and CEO of Square, a mobile payments company.

Dorsey was born and raised in St. Louis, Missouri, the son of Tim and Marcia (née Smith) Dorsey. He is of English, Irish, and Italian descent. His father worked for a company that developed mass spectrometers and his mother was a homemaker. He was raised Catholic, and his uncle is a Catholic priest in Cincinnati. He attended the Catholic Bishop DuBourg High School. In his younger days, Dorsey worked occasionally as a fashion model. By age fourteen, Dorsey had become interested in dispatch routing. Some of the open-source software he created in the area of dispatch logistics is still used by taxicab companies. Dorsey attended the University of Missouri–Rolla for two-plus years (1995–97) before transferring to New York University, but he dropped out in 1999, one semester short of graduating. He came up with the idea that he developed as Twitter while studying at NYU.

On April 7, 2020, Dorsey announced that he will move about US$1 billion of his equity in Square, Inc., just under a third of his total wealth, to Start Small, LLC, and to relief charity programs.