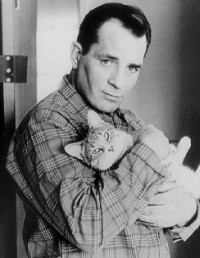 Jack Kerouac (pronounced /ˈkɛruːæk, ˈkɛrəwæk/; March 12, 1922 – October 21, 1969) was an American author, poet and painter. Alongside William S. Burroughs and Allen Ginsberg, he is considered a pioneer of the Beat Generation.

Kerouac's best-known books are On the Road, The Dharma Bums, Big Sur, The Subterraneans, and Visions of Cody.

In July 1957, Kerouac moved to a small house at 1418½ Clouser Avenue in the College Park section of Orlando, Florida, to await the release of On the Road. A few weeks later, the review appeared in the New York Times proclaiming Kerouac the voice of a new generation. Kerouac was hailed as a major American writer. His friendship with Allen Ginsberg, William S. Burroughs and Gregory Corso, among others, became a notorious representation of the Beat Generation. His fame would come as an unmanageable surge that would ultimately be his undoing. Kerouac's novel is often described as the defining work of the post-World War II Beat Generation and Kerouac came to be called "the king of the beat generation," a term that he never felt comfortable with. He once observed, "I'm not a beatnik, I'm a Catholic."

The success of On the Road brought Kerouac instant fame. He soon found he had little taste for celebrity status. After nine months, he no longer felt safe in public. He was badly beaten by three men outside the San Remo Bar in New York one night. Neal Cassady, possibly as a result of his new notoriety as the central character of the book, was set up and arrested for selling marijuana.

Publishers were eager for a quick "sequel" to capitalize on On the Road's success. In response, Kerouac chronicled parts of his own experience with Buddhism, as well as some of his adventures with Gary Snyder and other San Francisco-area poets, in The Dharma Bums, set in California and Washington and published in 1958. It was written in Orlando between November 26 and December 7, 1957. To begin writing Dharma Bums, Kerouac typed onto a ten-foot length of teletype paper, to avoid interrupting his flow for paper changes, as he had done six years previously for On the Road.

Kerouac was demoralized by criticism of Dharma Bums from such respected figures in the American field of Buddhism as Zen teacher Ruth Fuller Sasaki and Alan Watts. He wrote to Snyder, referring to a meeting with D. T. Suzuki, that "even Suzuki was looking at me through slitted eyes as tho I was a monstrous imposter". He passed up the opportunity to reunite with Snyder in California, and explained to Whalen, "I'd be ashamed to confront you and Gary now I've become so decadent and drunk and dontgiveashit. I'm not a Buddhist any more."

Kerouac also wrote and narrated a "Beat" movie entitled Pull My Daisy in 1959. Originally to be called "The Beat Generation", the title was changed at the last moment when MGM released a film by the same name which sensationalized "beatnik" culture.

John Antonelli's 1985 documentary Kerouac, the Movie begins and ends with footage of Kerouac reading from On the Road and Visions of Cody on The Tonight Show with Steve Allen in 1957. Kerouac appears intelligent but shy. "Are you nervous?" asks Steve Allen. "Naw", says Kerouac, sweating and fidgeting.

Kerouac developed something of a friendship with the scholar Alan Watts (cryptically named Arthur Wayne in Kerouac's novel Big Sur, and Alex Aums in Desolation Angels). Kerouac moved to Northport, New York in March 1958, six months after releasing On the Road, to care for his aging mother Gabrielle and to hide from his new-found celebrity status.