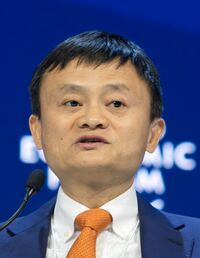 Jack Ma Yun (Chinese: 马云; [mà y̌n]; born 10 September 1964- ), is a Chinese business magnate, investor and philanthropist. He is the co-founder and former executive chairman of Alibaba Group, a multinational technology conglomerate. Ma is a strong proponent of an open and market-driven economy.

In 2017, Ma was ranked second in the annual "World's 50 Greatest Leaders" list by Fortune. He has widely been considered an informal global ambassador for Chinese business, and is an influential figure for the community of startup businesses. In September 2018, he announced that he would retire from Alibaba and pursue educational work, philanthropy, and environmental causes; the following year, Daniel Zhang succeeded him as executive chairman.

As of January 2021, with a net worth of $61.4 billion, Ma is the third-wealthiest person in China (after Zhong Shanshan and Ma Huateng), as well as one of the wealthiest people in the world, ranked 20th by Forbes. In 2019, Forbes named Ma in its list of "Asia's 2019 Heroes of Philanthropy" for his work supporting underprivileged communities in China, Africa, Australia, and the Middle East.

Jack Ma is the founder of the Jack Ma Foundation, a philanthropic organization focused on improving education, the environment and public health.

In 2008, Alibaba donated $808,000 to victims of the Sichuan earthquake. In 2009 Jack Ma became a trustee of The Nature Conservancy's China program, and in 2010 he joined the global Board of Directors of the organization.

In 2015, Alibaba launched a nonprofit organization, Alibaba Hong Kong Young Entrepreneurs Foundation, which supports Hong Kong entrepreneurs to help them grow their businesses. During the same year, the company funded the rebuilding of 1,000 houses damaged by the earthquake-hit in Nepal, and raised money for another 9,000. In 2015 he also founded the Hupan School, a business school.

In September 2018 Ma started the Jack Ma Foundation and announced that he would retire from Alibaba to pursue educational work, philanthropy, and environmental causes.

In 2019, Forbes named Ma in its list of "Asia's 2019 Heroes of Philanthropy" and awarded him the Malcolm S. Forbes Lifetime Achievement Award for his work supporting underprivileged communities in China, Africa, Australia, and the Middle East.

In 2020, in response to the COVID-19 pandemic, the Alibaba Foundation and Jack Ma Foundation launched various initiatives, some of which involved donating medical supplies to the United States as well as various countries in Asia, Africa, and Europe.

Ma is a follower of both Buddhism and Taoism.