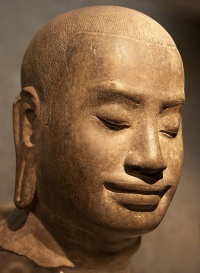 A statue of Jayavarman VII

Little is known of his early life but he was a son of King Dharanindravarman II and was bought up away from the royal court. On the death of his father his older brother ascended the throne and Jayavarman went into exile in Champa, now centeral Vietnam, probably for his own safety. In 1181, after a series of political crisis and murky palace intrigues, he finally became king. Over the next 30 years he proved himself to be an able and humane ruler who was prepared to use vast amounts of the state’s resources for the public good. He built most of Angkor’s more impressive temples; Bayon, Ta Prahom, Preah Khan and Neak Pean. He raised the huge walls around Angkor Thom to protect the city, constructed several major irrigation reservoirs and built an impressive series of highways. Rest houses were placed every 15 kilometers, approximately a day’s journey, along these highways. But his most famous undertaking was the establishment of 102 hospitals throughout the empire.

Each hospital had a Buddhist shrine attached to it and was staffed by two doctors, two nurses, two cooks and various other worker. The revenue of 838 villages was used for maintenance of all these hospitals. Records tell us the amounts of rice, honey, ginger, onions, mustard and various types of fruit that were provided for the staff and the patients. They also mention some of the medicines that were used; one, a cure for fever, contained ten ingredients. An inscription from one of these hospitals gives the king’s motivation for building them. ‘He felt his subjects’ afflictions more than his own; for the suffering of others is the suffering of a good king’.

As with some other ancient Buddhist kings, Jayavarman’s devotion to the Dhamma did not seem to detour him from embarking wars of expansion. In a series of campaigns he brought the Khmer Empire to its zenith, conquering parts of Vietnam, Laos, Burma and the Malay Peninsular. When Jayavarman died in 1218 his successor converted some of his temples into Brahmanical ones and destroyed or defaced others. But because of Jayavarman’s support and encouragement, Buddhism would soon replace Brahmanism as Cambodia’s main religion.