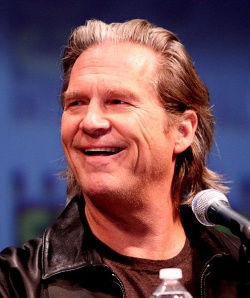 Jeffrey Leon "Jeff" Bridges (born December 4, 1949) is an American actor and musician. His most notable films include The Big Lebowski, King Kong, The Last Picture Show, Thunderbolt and Lightfoot, Tron, Starman, The Fabulous Baker Boys, The Fisher King, Fearless, The Contender, Iron Man, Tron Legacy and Crazy Heart, for which he won the Academy Award for Best Actor in a Leading Role at the 82nd Academy Awards.

Jeffrey Bridges was born in Los Angeles, California, the son of actress and writer Dorothy Bridges (née Simpson) and actor Lloyd Bridges. He has an older brother, Beau, and a younger sister, Lucinda. Another brother, Garrett, died of sudden infant death syndrome in 1948. Growing up, Bridges shared a close relationship with his brother, actor Beau Bridges, who acted as a surrogate father when their father was working. Bridges and his siblings were raised in the Holmby Hills section of Los Angeles. He served in the U.S. Coast Guard in the late 1960s, and as a reservist in the early 1970s.

Bridges, who is also the uncle of actor Jordan Bridges, married Susan Geston in 1977. They met on the movie shoot of Rancho Deluxe, which was filmed on a ranch where Geston was working as a maid. They have three daughters: Isabelle (born in 1981), Jessica Lily (born in 1983), and Hayley Roselouise (born in 1985). Bridges is also a known cannabis user; in an interview, he admitted to giving up smoking marijuana during the filming of The Big Lebowski, but says he has not "permanently kicked the habit."

Bridges has studied Buddhism and meditates for half an hour before beginning work on a film set. He carries with him a portable altar and meditation set.