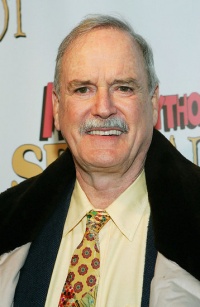 John Marwood Cleese (pronounced /ˈkliːz/; born 27 October 1939) is an Academy Award-nominated English actor, comedian, writer, and film producer who is known for being a member of the group of comedians responsible for the sketch show Monty Python's Flying Circus and the four Monty Python films: And Now for Something Completely Different, Holy Grail, Life of Brian and The Meaning of Life.

Cleese co-wrote and starred in, with first wife Connie Booth, the much admired British sitcom Fawlty Towers. Later, he co-starred with Kevin Kline, Jamie Lee Curtis and former Python colleague Michael Palin in A Fish Called Wanda and Fierce Creatures, and has made significant appearances in many films, including two James Bond films, The World Is Not Enough and Die Another Day, two Harry Potter films, Harry Potter and the Philosopher's Stone and Chamber of Secrets, and two Shrek films, Shrek 2 and Shrek 3 as Shrek's father-in-law, King Harold.

Cleese met Connie Booth in America during the late 1960s and the couple married in 1968. In 1971, Booth gave birth to Cynthia Cleese, their only child. With Booth, Cleese also wrote the scripts for and co-starred in both series of the TV series Fawlty Towers, even though the two were actually divorced before the second series was finished and aired. Cleese and Booth are said to have remained close friends since.

Cleese remarried in 1981, to American actress Barbara Trentham. Their daughter Camilla, Cleese's second child, was born in 1984. He and Trentham divorced in 1990. It was also during this time that Cleese moved from the United Kingdom to California.

On 28 December 1992, he married American psychotherapist Alyce Faye Eichelberger. In January 2008, the couple announced they had split. The divorce was settled in December 2008. The divorce settlement left Eichelberger with £12 million in finance and assets; by the time she has received an agreed £600,000 over the course of the next 7 years, she will have more of his money than he does. Cleese stated that "What I find so unfair is that if we both died today, her children would get much more than mine". He had begun to date American comedienne Barbie Orr in November 2008 but they split up in January 2009.

Cleese expressed support for Barack Obama's presidential candidacy, donating US$2,300 to his campaign and offering his services as a speech writer.

He is a Buddhist and vegetarian. He is a long-time supporter of the Dalai Lama and has even visited with him at the Dalai Lama's home in Dharmasala, India.