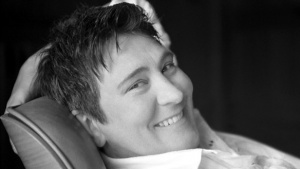 k.d. lang OC (born Kathryn Dawn Lang on November 2, 1961, in Edmonton, Alberta) is a Canadian pop and country singer-songwriter. The artist gives her name in lowercase letters, with the given names contracted to initials and no space between these initials.

Lang has won both Juno Awards and Grammy Awards for her musical performances. She is also known for being a vegetarian and an animal rights advocate.

Lang, who came out as a lesbian in a 1992 article of the LGBT-related news magazine The Advocate, has actively championed gay rights causes. She has performed and supported many causes over the years, including HIV/AIDS care and research. Her cover of Cole Porter's "So in Love" appears on the Red Hot + Blue compilation album and video from 1990, a benefit for AIDS research and relief.

Her animal rights vegetarian stance, including a "Meat Stinks" campaign, created much controversy, particularly at her hometown in the middle of Alberta's cattle ranching industry.

Lang appeared on the cover of the August 1993 issue of Vanity Fair. The cover featured lang in a barber chair while model Cindy Crawford appeared to shave her face with a straight razor. The issue contained a detailed article about lang which observed that she had thought that she would be ostracized by the country music industry when she came out as a lesbian. However, Nashville was accepting, and her records continued to sell. When she appeared in an ad for PETA however, Nashville was less impressed owing to the relationship between country music and cattle ranching.

In April 2008, lang spent time in Melbourne, Australia, as a guest editorialist for The Age. This was in connection with her support for the Tibet human rights issues. On April 24, 2008, she joined pro-Tibet protesters in Canberra as the Beijing 2008 Summer Olympics torch relay made its way through the Australian capital.