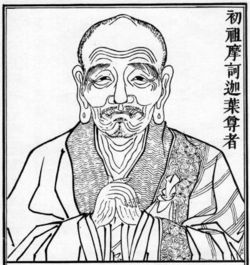 Kāśyapa Mātaṅga and Dharmaratna were, according to ancient tradition, the Indian monks who first introduced Buddhism into China.

It is said that the Emperor Ming (58-75 CE) had a dream in which a golden image appeared in the west. So moved was he by this strange dream that he sent a group of envoys beyond the western borders of China to find out what they could about this image. This was in about 64 CE.

The envoys returned three years later accompanied by two monks, Kāśyapa Mātaṅga and Dharmaratna. The monks brought with them a text called The Sūtra of the Forty-Two Sections and the emperor built them a monastery called The White Horse Monastery, after the horse that had carried the text and the monks' supplies. The Sūtra of the Forty-Two Sections is a collection of the Buddha's sayings, paraphrased and arranged according to subject. It is not an Indian work but was probably compiled in Central Asia or Afghanistan as a brief introduction to Buddhism. It has remained popular in China right up to today. The White Horse Monastery, much rebuilt and renovated over the centuries, can still be seen in Luoyang, the ancient capital of China.