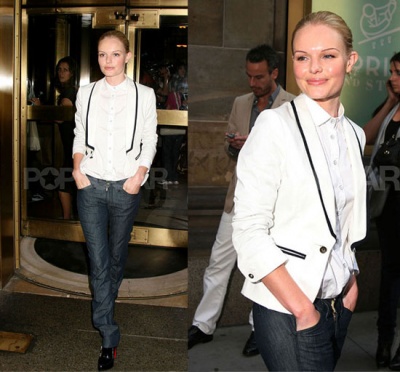 Catherine Ann "Kate" Bosworth (born January 2, 1983) is an American actress. She made her screen debut in Robert Redford's 1998 film The Horse Whisperer. Bosworth starred in the television series Young Americans, in which she played Bella Banks, though the series was not picked up for another season. She became well known with a leading role in 2002's Blue Crush. The following year, Bosworth played the teenage girlfriend of porn star John Holmes in Wonderland opposite Val Kilmer. In 2004, she portrayed Sandra Dee in Kevin Spacey's Beyond the Sea. Bosworth since appeared in several notable films, including Superman Returns (2006), where she played Lois Lane, and 2008's blackjack drama film 21.

In 2006, Bosworth made media headlines with a dramatically thinner appearance. She became part of a trend of young Hollywood actresses who have debuted thin bodies. The following year, however, photographs indicated that she went back to a healthy weight. In 2008, she became both Calvin Klein Jeans newest model and spokeswoman for Coach newest luxury bags. In her personal life, Bosworth has dated actors Matt Czuchry, from 2000 to 2002 and Orlando Bloom, from 2002 to 2006. She is dating English model turned singer-songwriter James Rousseau.

She is a Buddhist and has stated, "Buddhism is just a really incredible state of mind. It's just a beautiful place to try and be at. It's basically about constantly growing and making yourself a better person and focusing on what you want for yourself and the world and really putting it out there. It's amazing. If you, like, have everybody taking 10 minutes a day and really focusing on, like, positivity and a better world and a better self, imagine all that, just all that positivity going out there."