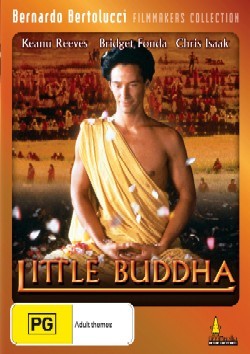 Keanu Reeves playing the Buddha in the movie Little Buddha

Keanu Charles Reeves (pronounced /keˈɑːnuː/ [kay-AH-noo, often mispronounced as kee-AH-noo]; born September 2, 1964) is a Canadian-American-British actor best known for his portrayals of Ted Logan in Bill & Ted's Excellent Adventure and Bill and Ted's Bogus Journey, Officer Jack Traven in Speed, and Neo in the action film trilogy The Matrix. Other notable roles include starring as Siddhattha Gotama in Little Buddha; as Scott Favor in the drama My Own Private Idaho opposite River Phoenix; as the title character in the sci-fi film Johnny Mnemonic opposite Dolph Lundgren; as Kevin Lomax in the supernatural thriller The Devil's Advocate opposite Al Pacino; the chevalier Danceny in Dangerous Liaisons; and starring roles in Chain Reaction, Constantine and the surf drama Point Break opposite Patrick Swayze. He played bass guitar in the grunge band Dogstar during the 1990s, and more recently in the band Becky. In an ET online survey in 2006, he was included in the "Top Ten of America's Favorite Stars". On January 31, 2005, Reeves received a star on the Hollywood Walk of Fame.

For nearly a decade following his initial rise to stardom, Reeves preferred to live in rented homes and hotels and was a long term resident of the Chateau Marmont. Reeves bought his first house in the Hollywood Hills of Los Angeles around 2003, and also has an apartment on Central Park West in New York City.

Although born in Lebanon, Reeves is not a Lebanese citizen, because his parents were not Lebanese. Instead, he is a naturalized Canadian citizen who also holds American and British citizenship through the principle of Jus sanguinis.

Reeves has never been married. In December 1999, Reeves' girlfriend Jennifer Syme gave birth to a stillborn daughter who was named Ava Archer Syme-Reeves. In April 2001, Syme was killed in a car accident. She was buried next to their daughter in the Westwood Village Memorial Park Cemetery in Los Angeles, California.

In 2008 Reeves was sued, unsuccessfully in Los Angeles Superior Court for $711,974 by paparazzo Alison Silva for allegedly hitting and injuring him with his Porsche after visiting a relative at a Los Angeles medical facility. The paparazzo's lawsuit took a year and a half to make it to trial, with all 12 jurors rejecting the case in just over an hour.