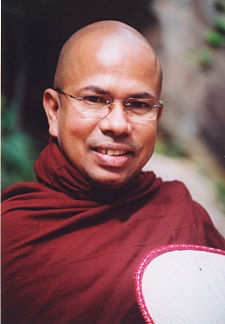 Gnanananda Thero was born in to the Roman Catholic family, parented by Cristy Kabraal and Violet Perera. The circumstances that followed his birth were 'miraculous', as the whole family became Buddhists just 6 months after his birth, going to the extent of giving up their main source of income: 'animal husbandry for meat' (a livelihood advised against by the Buddha). Opportunity for Buddhist education was therefore available for him from the childhood.

Ordained on March 26th, 1979 (i.e. at age 17) under Ven. Dambagasare Shri Sumedhankara Thero and Ven. Dikwelle Pannananda Thero at Seruwavila, he received traditional Buddhist academic education and entered the University of Sri Jayewardenepura. Having understood the inability to achieve what he wanted in a university, he quit and started associating meditation centers and hermitages.

Having practiced and preached Dhamma for years, he founded Mahamevnawa in 1999 under the guidance of Ven. Kotapola Amarakitti Thero, in Waduwava, Polgahawela. Mahamevnawa is currently spreading steadily under his guidance (It has around 40 branch monasteries for meditation throughout Sri Lanka, and overseas: Canada, USA, Australia, and UK.

He now teaches Buddhism (Theravada), emphasizing the need of practicing it in pure form (i.e. as in the Suttas) and casting off what not advocated by the Buddha.

"Our Teacher, the Buddha has taught that birth as a human being is, indeed, a very rare achievement. Fortunately, we have now obtained that rare achievement. Yet, we have to remember that man's greatness does not lie either in his nationality, caste clan or any such feature. His greatness depends solely on his conduct. Man's experiencing of happiness and suffering, too, is related to his three modes of action namely, mental, verbal and physical action. The Buddha devoted all his life to save man from dukkha - suffering. We are followers of the Buddha and our fervent hope is to see a world full of people who are freed from dukkha."

"Mankind's wonderful treasure of wisdom is the Teaching of the Buddha. This doctrine illuminates our lives bringing happiness and joy. Go in search of this wonderful Dhamma yourself, lead your life accordingly, get rid of your suffering and join that fortunate band of people who experience the Supreme Bliss."

The Most Ven Kiribathgoda Gnanananda Thero has written many books based on the Teachings of Buddha. The language associated in these publications is aimed on a single vision. That is to emphasize uncontaminated Buddhism that can be comprehended by anyone who reads it.

The Most Ven Thero has also commenced a culture in Sri Lanka (traditionally known as Dhamma Island – Island full of Buddha’s Teachings) to preach Buddha’s teaching in Sinhala (National Language in Sri Lanka) even though the Teachings are traditionally done in Pali language. Many disciples believe that they are now able to preach Buddha’s teachings with the right understanding.

It is remarkable that anyone who reads these publications will find themselves with a greater determination to follow through what Buddha sermonized as The Noble Eightfold Middle Path.