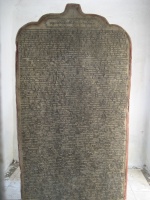 Kuthodaw Pagoda from the southeast terrace

Kuthodaw Pagoda is a Buddhist stupa, located in Mandalay, Burma (Myanmar), that contains the world's largest book. It lies at the foot of Mandalay Hill and was built during the reign of King Mindon. The stupa itself, which is gilded above its terraces, is 188 feet (57 m) high, and is modelled after the Shwezigon Pagoda at Nyaung-U near Bagan. In the grounds of the pagoda are 729 kyauksa gu or stone-inscription caves, each containing a marble slab inscribed on both sides with a page of text from the Tipitaka, the entire Pali Canon of Theravada Buddhism.

Mindon Min had the pagoda built as part of the traditional foundations of the new royal city of Mandalay in 1857. He was later to convene the Fifth Buddhist Synod in 1871, but wanted to leave a great work of merit by having the Tipitaka set in stone for posterity, meant to last five millennia after the Buddha. Construction began in 1860, its hti (umbrella or crown) mounted on 19 July 1862, and the inscriptions were laid open to the public on 4 May 1868. They were arranged in neat rows within three enclosures, 42 in the first, 168 in the middle and 519 in the third. One more stands at the southeast corner of the first enclosure making it 730, and this stone records how it all came into being. Thirty four brick zayats (rest houses) stood all around except on the east side of the pagoda.

The main entrance is from the south through massive but open teak doors ornately carved with floral designs, scrolls, and Deva Nats. It is a covered approach or saungdan as in most Burmese pagodas with frieze paintings under the roof. Between the rows of stone-inscription stupas grow mature star flower trees (Mimusops elengi) that emanate a jasmine-like fragrance to the entire complex. Burmese families may be seen having a picnic in the cool shade under these trees, picking the flowers to make star flower chains for the Buddha or to wear in their hair, or the children playing hide and seek among the rows of stupas. On the southwest inner terrace is one very old tree believed to be 250 years old, its low spreading boughs propped up by supports.