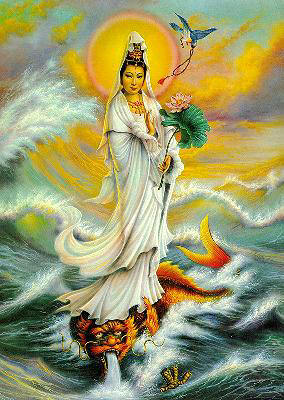 Kwan Yin (also written and pronounced as Guan Yin) is the most important female figure in many Buddhist traditions. She is the goddess of compassion. In Buddhism gods are impermanent higher beings who are still subject to rebirth, they are not absolute power deities or creators, as in the western use of the term God. Kwan Yin is a rebirth of the bodhisattva Avolikiteshvara, a monk from a previous eon who was reborn in a heavenly realm and filled with compassion for all living beings. One legend states that Avolikiteshvara chose to be reborn as a beautiful woman to marry a famous king and convince him to become a Buddhist.

The following is an essay by Francis Story, which was published in a Buddhist magazine in Singapore:

IT is said that when Avalokitesvara who is supremely compassionate, wanted to reveal the divine nature of mercy to mankind he took birth as a woman. So it comes about that in Chinese are we have one of the most beautiful concepts of art East or West, the figure of Kwan-yin Even those who do not know her, the gracious figure of Kwan-yin, in painting, sculpture, metal work or delicate porcelain, conveys something of the spiritual meaning that like an aura of infinite love surrounds her name. It is present in every flowing line of the robe that clothes her, in the graceful shape of her hands, the serene yet tender expression of the oval face, even in the slender, naked feet, one of which rests on the open lotus that is her throne. The whole figure is serene and full of repose, yet at the same time instinct with life, and a soft light seems to spread all about it, as though the rays of compassion are kindled within, to suffuse the world of living beings. Generations of artists have found inspiration for their noblest work in the figure of Kwan-yin; generations of craftsmen have expended their patient skill on the loving creation of her form; and for centuries men and women have turned to her image as the embodiment of their longing for a better, purer life. Lovely and gracious as her figure is, there is nothing in it of sensuality; it seems to be pure spirit, radiant with an ethereal beauty, its form and substance a transmutation into something finer than the gross materials on earth.

She, who is mercy incarnate, shed no tears. Her compassion is not that of an emotion or a passing mood; it has its being in the profound stillness of the heart, where dwells knowledge and understanding. The tranquil face of Kwan-yin reflects the nature of infinite peace, of she who has no desire but to remove the distress of others must herself be undistracted. She lives in the world, suffers with the world, but does not depart from the eternal Void.

Yet there is something awe-inspiring in the thought of a compassion that is completely undiscriminating, a compassion that looks upon all alike – the judge and the criminal, the executioner and the executed, the torturer and the man undergoing torture – and sees them all in a clear and equal light as victims of a self-created situation. Can that godlike dispassion in compassion be likened in any way to the pity that we know, the human pity mixed with hatred of the cause of the suffering? Or is it that we, who have never looked upon injustice without anger, have never known what true compassion is?