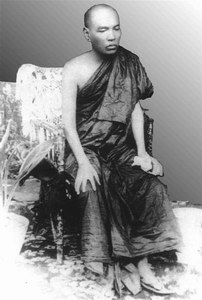 Ledi Sayādaw (1846 - 1923) was a famous Theravadin Buddhist monk in Burma (now Myanmar). He was recognized from a young age as being developed in both the theory and practice of Buddhism and so was revered as being both scholarly and saintly. He wrote many books on Dhamma in Burmese and these were accessible even to a serious lay person, hence he was responsible for spreading Dhamma to all levels of society and reviving the traditional practice of vipassana meditation, making it more available for renunciates and lay people alike.

He learned the technique of Vipassana still being taught in the caves of the Sagaing Hills; and after mastering the technique, he began to teach it to others. His vihara (monastery) was in Ledi village near the town of Monywa. There he meditated most of the time and taught the other bhikkhus. His leading disciple was a farmer Saya Thetgyi and so began a chain of lay teachers that continues to the present whereas previously only the monks were taught vipassana.

At other times he traveled throughout Myanmar. Because of his knowledge of pariyatti (theory), he was able to write many books on Dhamma in both Pali and Burmese languages such as, Paramattha-dipani (Manual of Ultimate Truth), Nirutta-dipani, a book on Pali grammar and The Manuals of Dhamma. At the same time he kept alive the pure tradition of patipatti (practice) by teaching the technique of Vipassana to a few people.

Ledi Sayadaw was perhaps the most outstanding Buddhist figure of his age. He was instrumental in reviving the traditional practice of Vipassana, making it more available for renunciates and lay people alike. In addition to this most important aspect of his teaching, his concise, clear and extensive scholarly work served to clarify the experiential aspect of Dhamma. Many of his works are still available, including in English through the Buddhist Publication Society.