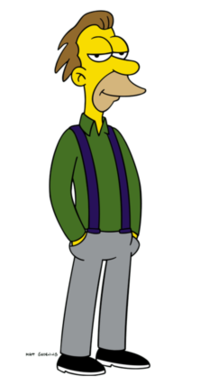 Lenny Leonard, is a fictional character in the FOX animated series, The Simpsons, and is voiced by Harry Shearer. He is the best-friend of Carl Carlson and Homer Simpson. He works at the Springfield Nuclear Power Plant and possesses a master's degree in nuclear physics, but is portrayed as a simple, often naïve blue-collar working man.

Despite being shown in the First Church of Springfield, Lenny is a Buddhist. Born in Chicago, he is also a war hero and a three-time juror. His grandmother spent 20 years in a Soviet work camp, hinting that Lenny is at least half Russian. During one episode, he is shown to be an adept guitar player. "Homer the Great" reveals Lenny was member number 12 of the Springfield chapter of the Stonecutters secret society. In the episode "Half-Decent Proposal", Lenny is shown to have little regard for his own life: "Quick and pointless, that's the death for me."