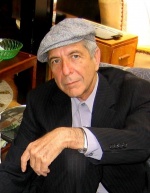 Leonard Norman Cohen, CC, GOQ (September 21, 1934 - November 7, 2016) is a Canadian singer-songwriter, musician, poet, novelist, and artist. Cohen published his first book of poetry in Montreal in 1956 and his first novel in 1963. His work often deals with the exploration of religion, isolation, sexuality and complex interpersonal relationships.

Musically, Cohen's earliest songs (many of which appeared on the 1967 album, Songs of Leonard Cohen) were rooted in European folk music. In the 1970s, his material encompassed pop, cabaret and world music. Since the 1980s his high baritone voice has evolved into lower registers (bass baritone and bass), with accompaniment from electronic synthesizers and female backing singers.

Over two thousand renditions of Cohen's songs have been recorded. He has been inducted into both the Canadian Music Hall of Fame and the Canadian Songwriters Hall of Fame and is also a Companion of the Order of Canada, the nation's highest civilian honour. While giving the speech at his induction into the American Rock and Roll Hall of Fame on March 10, 2008, Lou Reed described Cohen as belonging to the "highest and most influential echelon of songwriters."

Cohen was involved with Buddhism beginning in the 1970s and was ordained a Buddhist monk in 1996. Beginning in the late 1970s, Cohen was associated with Buddhist monk and rōshi (venerable teacher) Kyozan Joshu Sasaki, regularly visiting him at Mount Baldy Zen Center and serving him as personal assistant during Cohen's period of reclusion at Mount Baldy monastery in the 1990s. Sasaki appears as a regular motif or addressee in Cohen's poetry, especially in his Book of Longing, and took part in a 1997 documentary about Cohen's monastery years, Leonard Cohen: Spring 1996. Cohen's 2001 album Ten New Songs is dedicated to Joshu Sasaki.

Cohen died on November 7, 2016 at the age of 82 at his home in Los Angeles; cancer was a contributing cause.