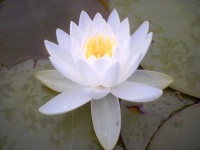 The lotus (bhisa, kamala, paduma, pokkhara, saroruha, mulàlipuppha or vàrija) is a beautiful flower with the botanical name of Nelumbium speciosum and which is native to many parts of Asia.

The Milindapanha describes the lotus as shiny, soft, desirable, fragrant, liked, sort after, praised, unsoiled by water or mud, adorned with petals, filaments and pericarps, frequented by bees and growing in cool limpid water (Mil.361).

Lotuses grow best in still muddy ponds and when mature put forth exquisite blossoms; white, pink or pastel blue - which rises above the surface. This characteristic is often mentioned in the Buddhist scriptures as being analogous to the enlightened person who lives in the world of ignorance and craving and yet rises above it to become pure and beautiful (Thi.700). Bhikkhu Bodhi and other teachers have described this characteristic as follows: Just as a lotus grows up in a muddy lake, but rises above the water and stands in full splendor unsoiled by the mud, so the Buddha, having grown up in the world, overcomes the world and abides in its midst untainted by its impurities.

The Buddha also often compared the way drops of water slip off the lotus leaf to the way the enlightened person remains unaffected by the temptations and vicissitudes of the world (Dhp.401). For these reasons and simply because of its sheer beauty, Buddhists have always had a particular regard for the lotus.

The lotus is mentioned in several places in the Suttas, including AN 10.81 Bahuna Sutta and AN 4.36 Dona Sutta.

Just as a red, blue, or white lotus born in the water and growing in the water, rises up above the water and stands with no water adhering to it, in the same way the Tathagata; freed, dissociated, and released from these ten things dwells with unrestricted awareness. (AN 10.81)

The lotus flower is valued and venerated for the above reasons by both Theravada and Mahayana.

The Lotus in the Buddhist Art of India, Teoh Eng Soon, 2003.