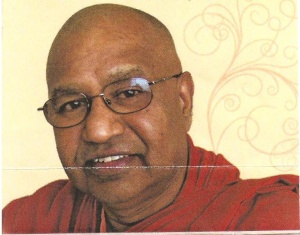 Bhante Seelawimala was born in Sri Lanka and ordained as a novice monk at the age of ten. Ten years later he received his full ordination as a Theravada Buddhist monk.

He completed his graduate studies in Sri Lanka in the field of Buddhist philosophy in 1974. The Buddhist Churches of America (BCA) invited Bhante in 1976 to teach Buddhism. For the past 25 years he has been teaching Buddhist philosophy at the Graduate Theological Union affiliated with the University of California, Berkeley. He was instrumental in establishing several Buddhist Centers in the United States and Canada. Currently he is the president of American Buddhist Seminary Temple at Sacramento and the Buddhist Vihara in Vancouver, Canada. He is also abbot of Ancient Cave Temple in Kurunegala, Sri Lanka. He works closely with American Buddhist Groups as well as Cambodian, Laotian, Thai, and Sri Lankan communities in the U.S.