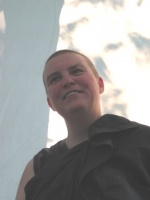 Bhikkhuni Maduka has a B.A. in Religion from Furman University and a degree in Computer Forensics. Beginning in 1995, as a Zen priest, Ven. Maduka, then Sensei DaiKai, began teaching the Dhamma. Despite extensive Zen training, she found herself irresistibly drawn to Theravada Buddhism.

In 2008, she ordained as a Theravada bhikkhuni. She heads Great Determination Hermitage, a promising new bhikkhuni residence situated on five acres in Stewart, Ohio.