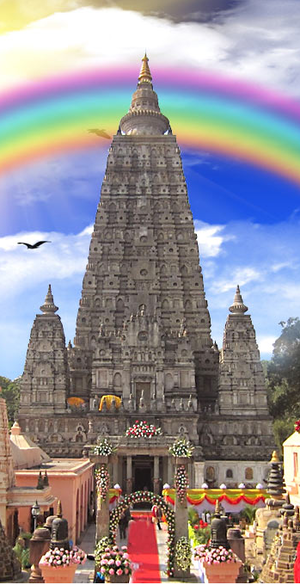 It was designated a UNESCO World Heritage Site in year 2002. A World Heritage Site is a landmark which has been officially recognized by the United Nations, specifically by the United Nations Educational, Scientific and Cultural Organization (UNESCO). Sites are selected on the basis of having cultural, historical, scientific or some other form of significance, and they are legally protected by international treaties. UNESCO regards these sites as being important to the collective interests of humanity.

The Maha Bodhi temple may have originally been built by King Ashoka in the 3rd century BCE and rebuilt after warfare destruction in the 2nd century CE and subsequently repaired over the centuries up to the present time. The current structure was started around the 5th century CE and repaired and renovated at various times ever since. It is 55 meters high (180 feet). There are also gardens, lakes, and a 24 meter (80 feet) Buddha statue in Bodh Gaya.

It is reported that King Ashoka built 84,000 edicts, monuments, and stupas honoring his legacy and the Buddha's teachings. If it were not 84,000 it certainly would have been at least a large number. King Ashoka spent one full week just gazing at the Bodhi Tree in Bodh Gaya. It is also reported that King Ashoka made several pilgrimages to Bodh Gaya. Considering this, we can say with virtual certainty that the original Maha Bodhi Temple must have been built by King Ashoka. The design and placement of the original may be very similar so that we could credit Ashoka with the establishment of the Maha Bodhi Temple at about 250 BCE.

Further evidence for the temple dating to the time of Ashoka comes from historical information, including a terracotta plaque and relief carvings referencing Ashoka and the temple found dating to around 25 BCE. According to scholar-historians, the original design included the slender pyramid design with an open pavilion (Huntington, 1985).

A graphic and comprehensive description of the Maha Bodhi complex is left by Huen Tsang, a Chinese pilgrim who visited Bodh Gaya in 637 CE. About the Maha Bodhi Temple he says:

"To the east of the Bodhi tree, there is a vihara about 160 or 170 feet high [48 to 52 meters]. Its lower foundation-wall is 20 or more paces in its face. The building is of blue bricks covered with chunam (burnt stone lime) all the niches in the different stones hold golden figures. The four sides of the building are covered with wonderful ornamental work : in one place figures of stringed pearls (garlands), in another, figures of heavenly rishis. The whole is surrounded by gilded copper amalaka fruit. The eastern face adjoins a storeyed pavilion, the projecting caves of which rise one over the other to the height of three distinct chambers; its projecting caves, its pillars, beams, doors, and windows are decorated with gold and silver ornamental work with pearls and gems let in to fill up interstices".

The four smaller pyramids at the corners were most likely meant to represent The Four Noble Truths and the 4 Brahma Viharas and the large slender pyramid in the middle representing The Eightfold Middle Path.

The Maha Bodhi Temple faces east, the direction Buddha was facing when he sat and meditated under the Bodhi Tree. The meaning of Maha Bodhi is Great Enlightenment. It is the holiest place in Buddhism, due to the fact that this is the place of enlightenment, the goal and purpose of the Dhamma.