From Dhamma Wiki
Revision as of 22:19, 22 October 2010 by TheDhamma (talk | contribs) (New page: Since the Maha Bodhi Temple is the holiest place in Buddhism, there have been several replicas of the temple made over the centuries. So far there have been six temples made which ...)
(diff) ← Older revision | Latest revision (diff) | Newer revision → (diff)
Jump to navigation Jump to search

Since the Maha Bodhi Temple is the holiest place in Buddhism, there have been several replicas of the temple made over the centuries. So far there have been six temples made which are similar in design: 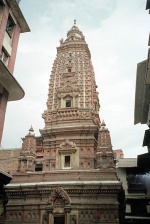 Mahabuddha Temple in Patan, Nepal is dedicated to the historical Buddha. It was built by priest Abhaya Raj of Patan. The temple is often called "the temple of a thousand Buddhas" because a Buddha image is engraved on every brick. The temple is modeled on the Maha Bodhi Temple at Bodh Gaya, India. 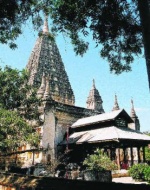 Mahabodhi Temple, Bagan is a Buddhist temple located in Bagan, Burma. It was built in the mid-1200s during the reign of King Htilominlo, and is modelled after the Maha Bodhi Temple, which is located in Bihar, India. The temple is built in an architectural style typical during the Gupta period, and contains a large pyramidal tower with many niches containing over 450 images of Buddha. The temple was destroyed during the 1975 earthquake, and was repaired in following years. 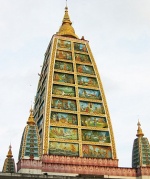 At the Shwedagon Pagoda complex there is a Maha Bodhi Temple style replica, known as Mahabodhi Paya. 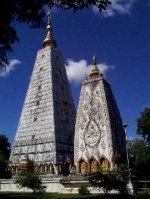 Wat Nong Bua is the only temple in Ubon Ratchathani, Thailand that has a rectangular Chedi, which is an imitation of the Chedi at the Maha Bodhi Temple in Bodh Gaya, India. The temple is located on the outskirts of Ubon Ratchathani on Highway No. 212 (Ubon-Amnat Charoen). At the 3-km. marker on the highway, turn into a side road and proceed for 800 meters to the temple. 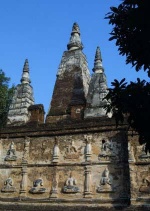