Since the Maha Bodhi Temple is the holiest place in Buddhism, there have been several replicas of the temple made over the centuries. So far there have been about fourteen temples made which are similar in design and perhaps a few others from ancient times no longer standing: 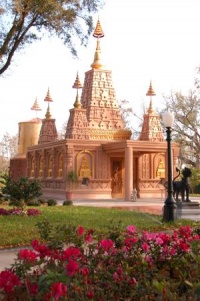 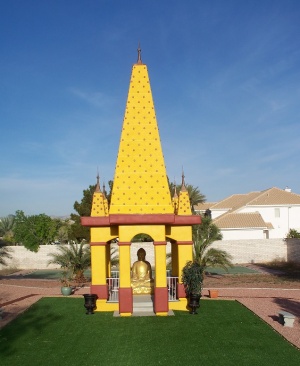 Mahabodhi Temple, Bagan is a Buddhist temple located in Bagan, Burma. It was built in the mid-1200s during the reign of King Htilominlo, and is modelled after the Maha Bodhi Temple, which is located in Bihar, India. The temple is built in an architectural style typical during the Gupta period, and contains a large pyramidal tower with many niches containing over 450 images of Buddha. The temple was destroyed during the 1975 earthquake, and was repaired in following years.

Mahabuddha Temple in Patan, Nepal is dedicated to the historical Buddha. It was built by priest Abhaya Raj of Patan. The temple is often called "the temple of a thousand Buddhas" because a Buddha image is engraved on every brick. The temple is modeled on the Maha Bodhi Temple at Bodh Gaya, India.

Vajrasana Dagoba is located in Pengxian County of Sichuan Province, China. It was built in the Maha Bodhi Temple design.

Wat Pai Rong Wa is a temple in Suphan Buri Province in one of the central provinces of Thailand. The complex includes a large Buddha statue and a Maha Bodhi Temple replica.

Myomanji Temple is a temple in Kyoto, Japan. On the temple complex there are many temples, buildings, rock gardens, beautiful landscaping and a Maha Bodhi Temple replica.

Kotahena Pagoda is a temple in Kotahena, Sri Lanka. The lower part of the temple is a good copy of the original Maha Bodhi Temple but the pinnacle is very different.

Wat Nong Bua is the only temple in Ubon Ratchathani, Thailand that has a rectangular Chedi, which is an imitation of the Chedi at the Maha Bodhi Temple in Bodh Gaya, India. The temple is located on the outskirts of Ubon Ratchathani on Highway No. 212 (Ubon-Amnat Charoen). At the 3-km. marker on the highway, turn into a side road and proceed for 800 meters to the temple.

Linh Son Temple is a temple in Kushinagar, India and includes a replica of the Maha Bodhi Temple on its grounds.

At Wat Florida Dhammaram there are replicas of all of the four major pilgrimage sites including a Maha Bodhi Temple replica, the stupa at Sarnath (first teaching), Maya devi temple (birth place), and parinibbana temple (Kushinagar). It is one of only a few replicas of the Maha Bodhi Temple outside of Asia.

Maha Bodhi Las Vegas is a unique design with burgundy and yellow-gold colors to match the culture / motif of the Southwestern states of the U.S. Construction completed on April 6, 2012 which was the full moon day of April 2012 (not planned, just happened due to construction company's schedule).

Gallery of photos of the Maha Bodhi Temple Replicas 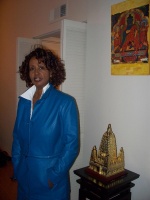 Buddhist next to a gold Maha Bodhi replica, close-up to the right 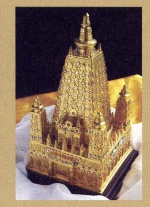 At Bodh Gaya, India there are several shops and street vendors that sell souvenir replicas of the Maha Bodhi Temple. Some are made of wood, stone, marble, and plaster.