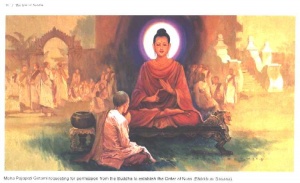 After Siddhattha became the Buddha, Mahà Pajàpati Gotami approached him and asked if he would allow her and other women to renounce the world, thus becoming nuns. The Buddha was very reluctant to do this but Ananda interceded on Gotami’s behalf. He asked if women had the same spiritual potential as men and the Buddha replied, "Having gone forth from home into homelessness in the Dhamma and discipline women are able to realise all the states leading to enlightenment and enlightenment itself."

Then Ananda asked the Buddha to consider how kind and helpful his foster mother had been to him. "Lord, Mahà Pajàpatã Gotamã was of great help to you – she is your aunt, your foster mother, she gave you her milk and suckled you when your mother died." Moved by these words, the Buddha decided to allow women to become nuns.