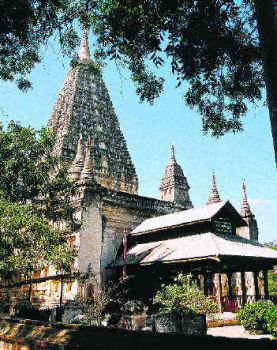 Mahabodhi Temple, Bagan is a Buddhist temple located in Bagan, Burma. It was built in the mid-1200s (approximately 1255 CE) during the reign of King Htilominlo, and is modelled after the Maha Bodhi Temple, which is located in Bihar, India. The temple is built in an architectural style typical during the Gupta period, and contains a large pyramidal tower with many niches containing over 450 images of Buddha. The temple was destroyed during the 1975 earthquake, and was repaired in following years.