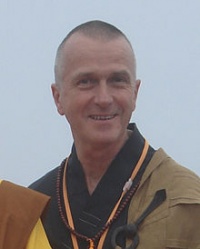 Marcel Geisser (Ven. Hsin Tao An) is an authorized Zen master in the Rinzai-Zen Buddhist lineage.

Having practiced since 1968 in both the Zen and Vipassana traditions, Dharmacharya Marcel Geisser has studied, beside many others, directly under the following masters: S.N. Goenka in India, Zen Master Ku San in South Korea, Joseph Goldstein in the U.S.A. and Zen Master Thich Nhat Hanh. He is the founder of the Mediation Center House Tao in Switzerland and teaches a combined method of Vipassana (satipatthana and anapanasati) and Zen called Sati-Zen. He founded the Sati-Zen-Sangha.